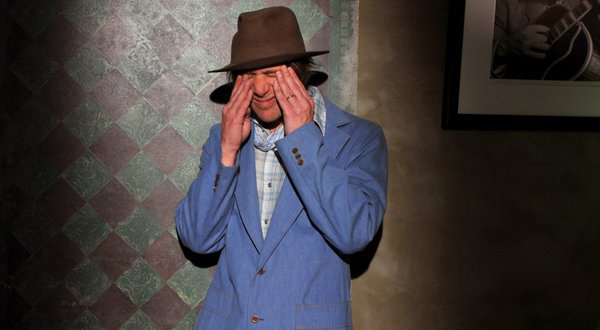 Three years ago Todd Snider released an album called The Excitement Plan, its title a phrase he says his father used before conning someone. He describes his old man as a grifter who’d finagle money from some poor mark and then, Snider recalls, “we’d have to move.” It was a rootless existence, which in part explains the allure that the music of Jerry Jeff Walker had on him. Walker’s first three albums had titles and songs that included such words as ramblin’, scramblin’, driftin’, ramblin’ (again), changin’, and bein’ (free).

“He’s probably my biggest hero,” Snider told me once, talking about “Mr. Bojangles,” Walker’s best-known song. “Some people would’ve gone to jail and come out ashamed or scarred or freaked out about money. This guy came out with one of the best songs ever. They should’ve thrown him down a fucking well to see what he came up with.”

Snider has spent years admiring and studying his hero’s work and the way it’s intertwined with his life. He even took a tip from Walker: When thrown in the county jail in Tillamook, Ore., Snider emerged with less money and a new song. Having cribbed songwriting tics and styles from Walker throughout his entire career, Snider has now paid a more direct tribute to Walker with the album Time as We Know It: The Songs of Jerry Jeff Walker, which will include 15 of Scamp’s songs performed by his biggest fan backed by the band Great American Taxi with Don Was producing. Snider plans to release the album in April, making it his second release of the season along with the excellent Agnostic Hymns & Stoner Fables, a just-released collection of new songs.

For more than 20 years Snider has sidestepped contemporary music trends — grunge, new new wave, freak folk, indie folk, and so on — for the time-honored craft of being a singer-songwriter, a guy who can sell a song with just an acoustic guitar and voice. He is, in this sense, a man out of time, the last kid trying to climb on board a wagon that started rolling away in the ’70s. He loves the Rolling Stones and Bob Dylan, but his touchstones tend to be guys like Walker, Guy Clark, Billy Joe Shaver and John Prine. An ardent fan, he digs beyond the songs. He once bought a cassette on eBay of Dylan arguing with a man on the telephone.

He spends as much time pondering Walker’s place in American song. Snider believes that Walker was the model for the freedom so many of them wrote about, starting with the persona. For a kid who wanted to break away from a dysfunctional home, Walker was an inspiration as well as muse.

“I remember when I was about 20 a friend thought he’d pop my balloon by telling me Jerry Jeff Walker wasn’t his name,” he says. “As s oon as I heard that I thought, ‘This guy is a fucking icon.’ It made me realize you don’t have to be who your parents are. You don’t even have to take the name they gave you, never mind the path they’re on or the ideas they try to give you. ‘Nope, fuck that, I’m Jerry Jeff Walker now.’ He ran to that with zero fear. And all his friends came running behind him.”

While “gypsy” is oft considered a pejorative term, Walker embraced it.

“When I saw that he wore that like a badge it made me feel less poor,” Snider says. “And richer for my experiences. It’s a tough sell in Europe, I guess, where they call you baby stealers. But he studied it and used it. That idea of ‘I’m coming to your town. First I’m going to figure out what all of you are, and then I’m going to present myself as that. And then I’m going to get the fuck out of here with a little something of yours.’ Well, that’s what being a songwriter is.”

A few months ago Snider and Walker were in Santa Fe for a show. “He wanted me to see it from his angle because it’s a town he’s torn down a few times,” Snider says. The night before the concert they went for some beers and ended up closing the bar before walking back to their hotel. The streets were empty.

“There’s nobody left,” Snider says, “and I hear this ding dinga dingdinga ding … And I just know it’s ‘Mr. Bojangles.’ We get closer and there’s a street singer with his hat on the ground, with a harmonica and a banjo. So it’s a pretty surreal scene. And Jerry Jeff says, ‘Let’s just listen a minute.’ We listened to the song and he threw a few bucks into his hat and we went back to the hotel.

“I never felt closer to that person,” Snider continues. “I felt like if I was 70 and walking around some town and a street singer was playing ‘Alright Guy,’ I’d look to the heavens and say, ‘Thanks.’ I think I’m his No. 1 fan. And if I’m not, I wish his No. 1 fan could’ve been there that night. He took that moment in so beautifully. He didn’t need the guy to know him. He already made this impact on the world, and here’s this homeless guy making himself feel good with a song he wrote when he was 20.”

Snider’s fandom started with a song and continued through the usual channels, including letters. He puts his exposure to Walker’s music at about 1985. “I thought of myself as a lead singer in a band, but I got into all that freedom spirit stuff,” he says. “I went to Gruene in 1985 and saw him play, and just like that it was, ‘I’m gonna be a folk singer now. I’m gonna be this now — me alone, no band.’” Walker was his portal to the Beats and the ’70s songwriters, so many of whom became mentors and then friends. He bought all the albums from the ’60s and early ’70s, and added the talking blues to his tool box. “I figured if I ripped off his first act instead of his second, that period where he reinvented himself as the folkie statesman, then I’d seem more original.”

He wrote 15 letters to Walker, but never mailed any of them. In 1994 Snider released his debut album, Songs for the Daily Planet. The album sounded like little of its era: It mocked the bellwether nature of alternative rock, daring to be rootsy with a garage rock ethos when rage and punk were the thing. At a Labor Day festival that year he ran across a field and embraced Walker. “I told him he was a king to me and I’m pretty sure he started looking for security,” Snider says.

If anything, Walker’s music taught Snider to be more observant, to take notice of his actions and the reactions they caused. His work also prompted Snider to cast an eye outward. For Walker, guys like Manny the hat maker, Charlie Dunn the boot maker, and folks like Curly and Lil had stories to tell. One of Snider’s best tunes, “Play a Train Song,” casts a deceased friend and local character in Nashville as an unforgettable and colorful raconteur. He loves underdogs, rapscallions, Shaver’s “lovable losers.”

“It’s that idea, if you hear a story in Alaska, you make sure it gets heard in Austin,” Snider says. “That’s my job and I learned it from him. It’s passing along stories like Woody Guthrie did.”

Sometimes the lessons learned were musical as well as lyrical. Snider’s “The Ballad of the Devil’s Backbone Tavern” is built on chords patterned after Walker’s “Gertrude.” He says he and Walker both pinch from a New Orleans-influenced sound Arlo Guthrie perfected. “The C to C7 to F to G, it sounds like New Orleans. Jerry Jeff does the shit out of that, and I’m happy to use it too.” He got Walker to teach him how he recast Pachelbel’s “Canon” as “Bojangles.” “Sing it like a kid,” was the advice. “Don’t sing while making the chord change. That’ll make it sound professional.”

Walker’s career certainly has the dogleg shape of a drifter. His early work made a convincing case for Walker as songwriter of the utmost esteem. But instead of cashing in, he put down his pen and championed the work of other songwriters he admired. Snider points out similarities to Hunter S. Thompson, which Walker played up with the name of his Lost Gonzo Band. “He does what he wants when he wants and he’s not sorry about it,” Snider says. “And he also doesn’t stand around waiting for a ‘thank you.’ And when Dylan inspired a million Dylans, he said, ‘Fuck it, I’ll become the happy gypsy guitar song man.’

Seventies country music? Snider believes Walker’s fingerprints are greater on it than those of Gram Parsons. “Gram played country and looked like a hippie,” he says. “The only thing similar there is the hair. If you listen to that 1972 album, the one titled Jerry Jeff Walker, that sounds more like where Waylon and Willie took it. Being more like the free-spirited guy with a fiddler in his band or that four-on-the-floor rock beat that Waylon had. It creeps up in that record.”

He says he’s been to Key West hanging out at 5 a.m. “with the pirate people,” and they’ve told him it was Walker, not local favorite Jimmy Buffett, who defined the prevalent subculture there. When Buffett got dropped by his label, Snider says, Walker suggested he check out the Florida island. “He did with Key West what Jerry Jeff did with Texas, he reinvented himself and made it home,” he says.

I ask Snider if there’s one line among Walker’s many quotable lyrics and slogans that most resonates with him. He chooses “gettin’ by.”

“That’s what he does, take something you haven’t planned and see what happens,” he says. “People make more of this than there is. There’s a lot of thought and brilliance that goes into doing what he does, but he downplays it. He doesn’t want any of it to seem like it’s grandiose.”