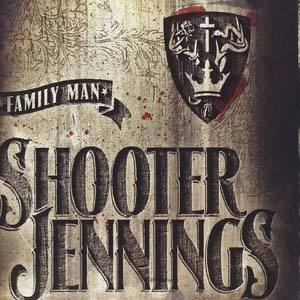 It’s no secret that following a famous relative into the music business can be as much of a liability as an asset. To deflect the inevitable comparisons to their legendary kin, some next-generation troubadours go out of their way to establish a sound of their own; but Shooter Jennings, son of Waylon, has never shied away from his outlaw country heritage. For better or worse, he’s always embraced it full on, sometimes to the point of unintentional parody — hitting a lot closer to the Kid Rock mark than his old man’s.

But Family Man finds him dialing down the rowdy shit-kicker schtick that encumbered Put the O Back in Country and Electric Rodeo, resulting in his most satisfying (and surprisingly understated) album to date. There’s still plenty of chest-beating rebel yell here — most explicitly in “Southern Family Anthem” and the opening “The Real Me,” in which he bellows, “I’m a double-talkin’, chicken-lickin’, meaner-than-the-Dickens, sick and wicked, hole-diggin’ pickin’ son of a gun!” And the prominent, loping bass line in “The Deed and the Dollar” further proves he’s still a proud chip off the ol’ Waymore block. But overall, this is a more reserved (in a good way) Shooter, mature enough to convey self-assured confidence more so than brash cockiness. The arrangements are rootsy and unmistakably country, with folksy melodies that don’t grab you by the collar so much as casually sneak up on you over repeated listens. The mandolin-driven “The Long Road Ahead” is particularly fine, as is the homespun “Daddy’s Hands” (arguably the most Waylon-sounding track on here) and the convincingly spooky, supernatural-tinged “The Black Dog.” Rest assured, ain’t nobody gonna be forgetting which family this pickin’ son of a gun comes from any time soon; but Family Man is a welcome and long-overdue step in the right direction towards true independence. Ol’ Waylon would be proud. — RICHARD SKANSE

Next post Justin Townes Earle: "Nothing's Gonna Change the Way You Feel About Me Now"