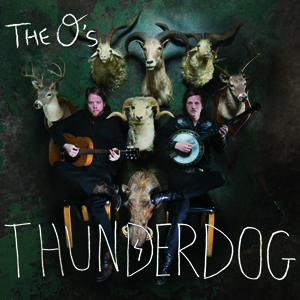 The O’s — the Dallas duo comprising Taylor Young on acoustic guitar and kick drum and John Pedigo on banjo — play an energetic kind of roots rock, making a mighty big noise with only three instruments. On Thunderdog, Young¹s acoustic slide guitar sizzles with energy and he plays with an attack that¹s somewhere between a rocker and a master of the pedal steel. His drumming is just as impressive: on songs like the bluesy “Cicerone” and the slow-stomping “Rearranged,” it’s hard to believe all the percussion isn’t coming from a full drum kit. Meanwhile, Pedigo uses elements of folk and country fingerpicking in his banjo playing, but just as often he plays long meandering lines that sound more like a staccato guitar, giving the tunes an aura that’s both familiar and slightly strange. He takes his instrument to the outer limits on the album’s final track, “Kitty.” With his banjo plugged into a fuzz pedal, Pedigo delivers a solo that has hints of metallic shredding. It’s just another example of how far these two O’s can and do go when they leave the constraints of tradition and old-time music behind. — J. POET

Previous post Mike Stinson: "Hell and Half of Georgia"