Mike Stinson: “Hell and Half of Georgia” 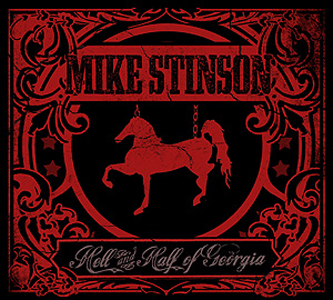 In the pantheon of so-called “neo” honky-tonkers, Mike Stinson already loomed rather large when he shifted his focus from L.A. to Houston. Now, after three years as a Texan, he’s a roadhouse favorite, even playing Chicken Shit Bingo Sundays at Austin’s Ginny’s Little Longhorn Saloon. But although Hell and Half of Georgia’s official ode to Stinson’s new state is the campy “Died and Gone to Houston,” a “London Homesick Blues”-style twanger, it’s songs such as “Walking in the Rain” and “The Box I Take To Work” that ultimately offer more satisfaction. The former, a slightly melancholy tune full of cascading guitar solos and gentle drops of harmony, points to the reality that what Stinson lacks in vocal quality, he somehow makes up for in lyrical and melodic skill. That’s further proven in “The Box I Take to Work,” which starts out as a catalog of stuff a musician drags around but becomes a metaphor-driven litany of the life, with lines of utter brilliance tossed out as casually as toothpicks. “I got a bunch of replacement parts for every time I come unwound,” he sings, later promising, “I can fix bruises and blisters, cuts and scrapes/to go with the pain I got some George Jones tapes.” With the occasional power chord or Stonesy riff snuggling under this pedal-steel-embroidered quilt of countrified rockabilly and honky-tonk songs, Stinson twangs his way into a permanent place in Texans’ hearts. — LYNNE MARGOLIS