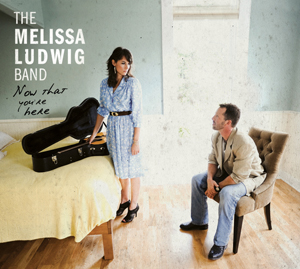 I don’t know how exactly the Melissa Ludwig Band ever came to be considered “Americana” (they finished second in that category in the 2009 San Antonio Current’s Rammy Awards). Sure, that’s one of your more loosely defined music genres, but if singer-songwriter Ludwig or anyone else in this band has any kind of Americana, country or folksy roots, they sure ain’t showing on their debut. And that’s by no means a dig; some times, good pop music should just be embraced as pop music, even when it’s as intelligently written and exquisitely crafted as the 11 sparkling gems that make up Now That You’re Here. Ludwig and her husband, guitarist Mitch Connell, handle all the writing, and the songs here are certainly melodically and lyrically solid enough to hold up as stripped-down acoustic fare. But it’s the full electric band treatment — especially the classy, clever keyboard flourishes (and backup vocals) of Nicolette Good — that really makes tracks like “Drink It Down,” “Fallen Angel” and especially “God Forbid” and the opening “Break Away” … well, break away from the same-old, same-old. Sometimes a slightly alarming hint of early-90s jam-band loopiness wafts in (the swirly guitar hook and bouncy rhythm in “The Way You Feel” smells like Spin Doctors), but overall Now That You’re Here is a breath of fresh air. — RICHARD SKANSE