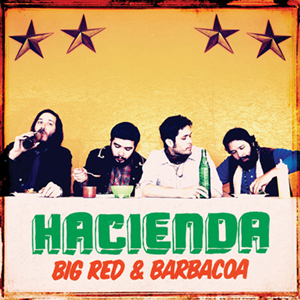 This fledgling San Antonio rock band’s sophomore release, Big Red & Barbacoa, bursts upon listeners just like the band’s career has exploded since hooking up with Black Keys frontman Dan Auerbach. Over a year of touring behind Auerbach as well as playing its own schedule has tightened and hardened this band like spring training. With a clutch of former classical players, the band skates breezily over Beach Boy-ish tunes like “I Keep Waiting” and “Hound Dog,” while instrumental rocker “Big Red” trots through numerous nods at the great twanging instrumentalists like Booker T., Duane Eddy and Link Wray. But it’s Farfisa-laced garage-rockers like “You’re My Girl” that channel San Antonio cats like Doug Sahm or Sunny and the Sunliners — run through that unstoppable low-end groove a la Black Keys — that really kick this album into high gear. With two stout albums and hundreds of high profile gigs behind them, better songwriting is all that keeps these guys from the rock ’n’ roll heights where bands like Kings of Leon reside. — WILLIAM MICHAEL SMITH

Previous post The Melissa Ludwig Band: "Now That You're Here"