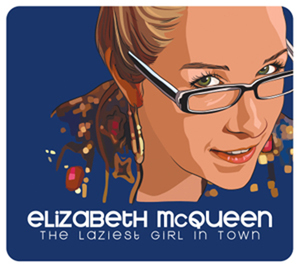 ELIZABETH McQUEEN
The Laziest Girl in the Town
Freedom Records

Somewhere out there, there’s a musical anthropologist who’s been looking for the missing link between jazz swinger Anita O’Day and Ian Dury, of Blockhead rhythm stick renown. Well, the search is over. Because Elizabeth McQueen, whose last release, 2005’s Happy Doing What We’re Doing, covered British pub-rock poets such as Nick Lowe, Elvis Costello and Graham Parker, delivers a far jazzier gem with The Laziest Girl in Town. Of course, McQueen is anything but the slacker gal in the Cole Porter-penned title track; she’s the relentless road warrior who never falls Asleep at the Wheel. For The Laziest Girl, McQueen brings husband and fellow AATW member David Sangers along for the ride, and they’re joined by Floyd Domino, Jonathon Doyle, Andrew Nafziger and Lindsay Green, who clearly relish the chance to stretch their chops and genre-bend as much as McQueen does. The sassy “Mind of Men” finds McQueen dishing on the opposite sex with the help of some spunky lead licks from Nafziger and Doyle’s equally sassy sax. “Gone Solid Gone,” co-written by McQueen and Sanger, swings and sways, finger pops and practically begs you to ba-dah-dah-ba-dop right along with ’em. Eschewing overdubs and the technological bells and whistles of today’s recording process, four of the tracks on the album were recorded in one fell swoop, giving The Laziest Girl a “music the way it should be played” authenticity. That unbridled energy propels the Dan Hicks song “Lonely Madman,” and gives tracks like “Love Isn’t Like That” the feel that last couple on the dance floor gets after a long night when it seems the band is playing one more just for them. Producing a top shelf record that does all this — but yet doesn’t come across like it’s straining all that hard — isn’t something just any lazy girl could do. — D.C. BLOOM

Next post The Melissa Ludwig Band: "Now That You're Here"