Beth Wood: “The Weather Inside” 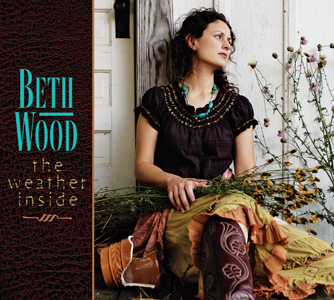 The term “recording artist” has become somewhat devalued in an era where any singer-songwriter with Garageband, a little gumption, a couple hundred bucks and a CD Baby account can get their music heard. But it’s one thing to be heard, and quite another to be noticed. When you come across a recording like Beth Wood’s The Weather Inside, you take note and recognize that this is the work of a genuine artist with a remarkable voice determined to make meaningful and lasting art. The West Texas native has been doing just that since her 1996 debut album, Woodwork, proving that the vaunted Lubbock musical genius gene isn’t just an XY chromosome kinda thing. Of course, the degree in literature from the University of Texas in Austin also has served her well.

With The Weather Inside, produced by Billy Crockett and recorded at Wimberley’s Blue Rock Artist Ranch and Studio, Wood stakes her claim to the lofty heights occupied by the Gilkysons and Griffins of the world. The songs here deal with the various coping mechanisms humans use to deal with life’s stark realities, disappointments and setbacks, from gritty resilience to the kindness of strangers. On the title track, Wood sings the tender story of a woman who considers leaving the domestic storm of living with a troubled veteran but opts instead to “find some place to ride it out.” She uses the feelings of insecurity that “The New Kid” in school always feels when uprooted and placed in new environments as a springboard to the other experiences life and love throw our way and which we survive when “somehow someone always reaches out a hand, someone always says, ‘I understand, are you okay?’ I guess I am.” And Wood paints a beautiful picture of the “The House that Made Me” in that city on the Texas plains, recalling “here’s where we would hide when tornados came, huddled in the hallway like it was a game, up above my reach there was a record playing, Willie with his blue eyes crying in the rain.” — D.C. BLOOM

Next post Elizabeth McQueen: "The Laziest Girl in Town"