Patricia Vonne: “Worth It” 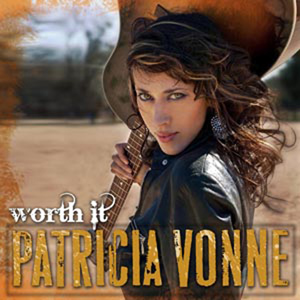 PATRICIA VONNE
Worth It
Bandolera

Patricia Vonne’s bio states that she was born in San Antonio, one of 10 kids in a family that also spawned maverick filmmaker Robert Rodriguez. But don’t believe it. This woman sprang fully grown, Athena style, right out of the seductive, twirling dust-devil grooves of Joe Ely’s 1995 Tex-Mex masterpiece, Letter to Laredo. Going back to her 2001 self-titled debut, the Austin-based singer-songwriter showed compelling promise right from the start. But she also came across a little too bold right out of the gate, almost like a caricature of exactly what you’d expect a castanet-snapping rock ’n’ roll siren (and actress/model) weaned on Ely’s flamenco-kissed border ballads to sound like. Experience and refinement would fix that soon enough, though; over the course of subsequent, much stronger albums Guitars & Castanets and Firebird — and multiple tours of Europe — Vonne stuck to her guns and broke that over-the-top stage persona to her will like a wild stallion.

The result, as heard now at the 10-year mark of her recording career, is the exceedingly aptly titled Worth It, a lean and lethal, dangerous beauty of an album that finds Vonne in complete control of not just her powerful voice and flair for sweeping drama, but every aspect of her craft and performance art down to the finest detail. There’s an epic, widescreen scope to the record, but the 10 songs here (three of them sung in Spanish) fly by in just over 35 minutes, with nary a wasted note or word. You fully expect songs with titles like “Cowskulls & Ghostowns” and “Gin and Platonic” to bust out with clichés blazing, and they do — but Vonne struts through both with such cocksure bravado, even the most cynically inclined will wanna lay down their arms and go along for the thrill ride. Even more irresistible is the sexy swagger of “Cut From the Same Cloth,” which features co-writer Rosie Flores and Ely himself on backing vocals, and the simply terrific “Love is a Bounty,” a Dwight Yoakam-worthy corker of a honky-tonker. According to her bio, that’s the first song Vonne ever wrote. She did right by letting it ripen on the vine, though, because the cool, casual confidence she brings to it here might have been out of her reach a decade ago.

Musically, the whole record (produced by Carl Thiel) is an instrumental treat, with Vonne (acoustic guitar and castanets), her lead guitarist (and husband) Robert LaRoche, bassist Scott Garber and drummer Dony Wynn joined by guests like Joe Reyes, Darin Murphy and Rick Del Castillo. It’s Del Castillo, naturally, providing the intricate flamenco guitar flourishes on “Fuente Vaqueros” and “El Marinero y La Sirena,” both of which Vonne co-wrote with San Antonio’s much-loved Michael Martin, of the Infidels fame. Granted, here in Texas, where even a legend like Willie Nelson seems game to sing with just about anybody, working with talent of that level doesn’t always equate with being on that level. But four albums into her career, Vonne has more than earned her spurs. Memo to Letter to Laredo: Your little girl really is all grown-up now, and she’s kicking ass with the best of the best. — RICHARD SKANSE