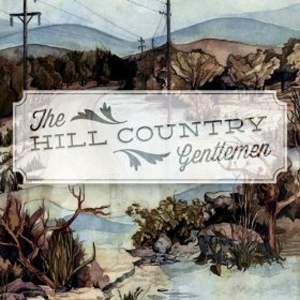 THE HILL COUNTRY GENTLEMEN
The Hill Country Gentlemen
Self Released

The Hill Country Gentlemen have been knocking around the San Marcos scene for going on two years now, and their self-titled debut came out last summer, so … my bad for not catching up to them until now. Sometimes the best discoveries in a crowded music scene are the ones hiding in plain sight. I saw the Gents live before I heard the record, not knowing any of the songs apart from a couple of shockingly well-executed covers (most notably a transcendent “The Weight” which could have been the highlight of any overstuffed all-star tribute to Levon Helm), and what struck me most was how great they sounded, exuding a confidence, chemistry and overall sense of got-their-shit-togetherness more suggestive of crack Nashville or Memphis session pros than a band of five young college-town hippie slackers. And they sound every bit as strong on their album, which founding members Troy Stone (lead vocals, acoustic guitar, harmonica), Kevin D. Humphrey (lead guitars, steel, organ, Resonator), Jeremiah Sawyer (bass), and Peter Lyman (drums) recorded at the Cheatham Street Woodshed before pianist Dan Holmes joined the band. Admittedly, there’s nothing explicitly “new” about their hybrid of Flying Burrito Brothers-style cosmic country — this road has been travelled many times since the No Depression-documented alt-country resurgence of the mid-90s. And yet, there’s just a hard-to-peg but palpable something about the way they pull it off that recalls the immediacy and freshness of genre touchstones like Son Volt’s Trace and Whiskeytown’s Stranger’s Almanac. The rhythm section and gifted multi-instrumentalist Humphrey shine throughout, and frontman Stone is a strong songwriter and singer, as convincing embodying the psyche of a famous bank robber in the opening “Floyd” as he is that of, well, a young college-town hippie slacker in the disarmingly rousing San Marcos anthem that closes the set, “Heaven in the Hill Country.” Really, the only knock against this debut is that it’s a tad over-long; none of the 12 songs necessarily stands out as filler, but the 53-minute total playing time kind of kills the desire to play the album again and again and really let it sink in. But as first impressions go, The Hill Country Gentlemen will knock you out. — RICHARD SKANSE