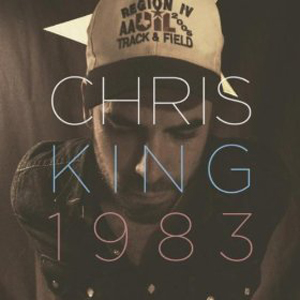 Chris King may not be a household name yet, but he’s hardly a stranger to those-in-the-know on the Texas music scene. For some time now, the Trishas’ merch designer extraordinaire has been the man that bands call to the stage to sit in with them or that other songwriters advise you to listen to. And as his winning full-length debut, 1983, makes clear, he’s got the goods to back up the buzz. On the surface, 1983 offers Texas music fans easily identifiable traces of lots of other acts they probably already love, from the peppy harmonies of Midnight River Choir (“Still Haven’t Said” and “Antler Inn Ballroom”) to the twangy throwback of Jason Eady (“You Leave Behind”). The opening track feels strongly reminiscent of vintage Jason Isbell, and Kelley Mickwee and Jamie Wilson of the aforementioned Trishas drop in on the album to co-write (Mickwee on “I’ve Been Dying”) and offer harmonies. But as apparent as all of King’s influeces seem to be here, the thing that makes 1983 special is the way he blends them all together and comes away with something new. Standouts include “Homeland,” the album’s most radio-friendly tune, and the closing “Something Less Formal,” but there’s really no discernable filler. On the whole, 1983 is an entirely fun album to listen to — the kind that you’ll be playing halfway through for the second time in a row before you realize it. — CODY OXLEY