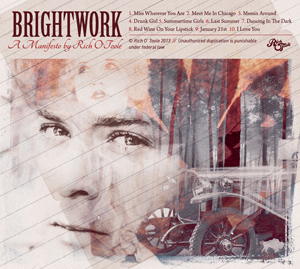 Rich O’Toole likes girls. Summertime girls, Texas girls, California girls, Chicago girls, and especially unforgettable drunk girls whose names he may or may not quite catch. Girls wearing bikinis and pearls (?) with “sweet tan lines and legs that don’t stop,” cranking “Josh Abbott on the radio” while knocking back jello shots and waiting for a whirl behind a ski boat. In other words, the kind of fun-loving girls who might dig Rich O’Toole’s music, buy his albums and drag their boyfriends (or better yet, their girlfriends) out to his shows. That’s the target audience he’s clearly aiming for with all 10 tracks on his latest, the humbly titled Brightwork: A Manifesto by Rich O’Toole, and assessed with that purpose in mind, the album hits its mark. O’Toole’s voice may not be particularly distinctive, but it’s strong and self-assured enough to sell both hooky anthems like “Miss Wherever You Are” and earnest, heart-on-sleeve melodic ballads like “January 21st” without breaking a sweat. O’Toole went with “Drunk Girl” (which he didn’t write, but might as well have) as the album’s first single, but it’s really not hard to imagine any one of these songs sitting comfortably on the radio next to any song by his name-checked buddy Abbott. In fact, for all the fuss he made on Twitter recently about wanting to disassociate himself from the Texas country clique and rebrand his music “indy” (sic) country, O’Toole’s sensibilities are mainstream to the core, right down to the Bruce Springsteen (who saved his soul, he notes at one point) tune he picked to cover: “Dancing in the Dark.” O’Toole’s version sticks so close to the Born in the U.S.A. original, he might as well try to lure Courtney Cox away from Cougar Town long enough to shoot a video. But it’s actually Brightwork’s least overtly polished song, the closing “I Love You,” that leaves the most-lasting impression. The laid-back but playful track finds O’Toole at his most down-to-earth and unassuming, running down a list of his favorite things (from the Beatles and the Boss to Whataburger and Waffle House) before admitting that “the one thing about me that rings so true/I like all of that but baby, I love you.”) Corny, yes, but genuinely charming, too. A little more of that in his next “manifesto” just might go a long way towards endearing O’Toole to an audience willing to give him a listen without the requisite round of jello shots. — RICHARD SKANSE