The Hickoids: “Kicking It With the Twits” 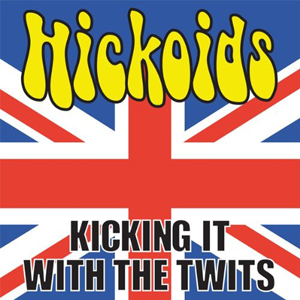 Listening to the Hickoids swagger their way through the Elton John/Bernie Taupin chestnut “Benny and the Jets,” it’s hard to believe this is essentially the same band that took home Country Band of the Year honors at the Austin Music Awards in 1985. (Of course, even in 1985 the Hickoids were about as country as Lady Gaga or Taylor Swift, but that’s another story.) The latest project to slither forth from this surly, androgynous Jeff Smith/Davy Jones-led musical circus is a greasy, sleazy set of covers of Brit-rock classics like “Neat, Neat, Neat” by the Damned, Brian Eno’s “Needles in the Camel’s Eye,” and the Rolling Stones’ trashy “Have You Seen Your Mother Baby (Standing In the Shadows)” that is absolutely magnetizing from the first note. In making what may be their best-sounding album ever, the Hicks don’t tinker with the melodies, but they do push them through all the elements that make San Antonio rock unique: the fat conjunto bass lines, the mandatory Augie Meyers B-3 organ jive, and the sonics of classic garage rock. Put the top down on the convertible, push Kicking It with the Twits into the CD player, and crank it, because this is perfect Texas road trip music, especially if a highway patrolman is in hot pursuit. — WILLIAM MICHAEL SMITH