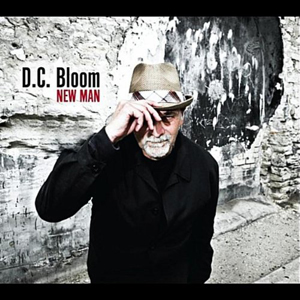 Corporate/political speechwriter by day, singer-songwriter by night D.C. Bloom moved to San Antonio from Washington, D.C., six years ago, and wasted precious little time in playing to the locals’ sense of regional pride with songs like “I Can’t Forget the Alamo,” “The Ballad of Boerne and Alice” and the shoulda-been-a-monster-hit “Manu Ginobili.” On New Man, Bloom’s second full-length release since landing in the Lone Star State, he eases up on the Texas references (apart from an affectionate nod to “Oma’s Secret Garden” in Gruene), but his topical wit remains as sharp as ever. At his breezy best (“I’m Dirty,” “Sexual Tension,” “Sitcom”), Bloom evokes a cross between musical satirist Tom Lehrer and Harry Nilsson at his most whimsical, both lyrically and musically. But songs like “On That Primal Shore” and “Blinded By Faith” suggest there’s a real craftsman at work here, a poet behind the wisecracking jester, while the disarmingly uplifting opener, “Another Day,” betrays a touching sincerity. Like a favorite nutty uncle or idiosyncratic sitcom character, Bloom’s self-effacing, irreverent sense of humor can’t entirely hide a genuine heart and even the odd pearl of wisdom. — RICHARD SKANSE

Previous post The Hickoids: "Kicking It With the Twits"