The Greencards: “The Brick Album” 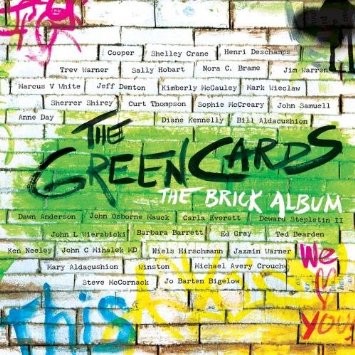 After three releases on Dualtone Records and one on Sugar Hill, the Australia-to-Austin-to-Nashville migrants the Greencards funded their new indie album with a novel idea: They sold the artistic equivalent of building or sidewalk bricks, giving every buyer a named “brick” in the album art. We don’t know if it funded performances by mandolin guru Sam Bush or vocalist/guitarist Vince Gill, but both contribute. Bush is on the Fleetwood Mac-ish opener, “Make It Out West”; Gill joins vocalist/bassist Carol Young on “Heart Fixer.” Producer Justin Niebank upholds the band’s usual standard of sterling sound, and helps them continue exploring areas ranging far beyond bluegrass (though there’s more of a pop vibe and less of the jazz inflections that made Veridian such a special release). Young’s crystalline voice is especially pleasing on “Naked on the River” and the delicate “Girl in the Telescope” (another tune on which Young and band co-founder Kym Warner collaborated with fellow Aussie-to-Nashville transplant Jedd Hughes). Yet the ultimate standouts are Warner’s mandolin-driven instrumentals, “Adelaide” and “Tale of Kangario” (wonderfully augmented by new addition Tyler Andal on fiddle). You can take the player out of Australia … . — LYNNE MARGOLIS

Next post Turnpike Troubadours: On a roll and bound for glory