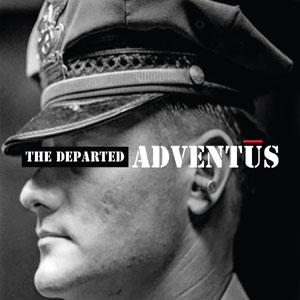 The Latin title of the Departed’s new record, Adventus, means “arrival.” It’s a clever play on the band’s name as well as a signpost of sorts, marking the Departed’s progress over the last two years since its inception. And of course the word “adventus” just sounds and certainly looks cool on the cover, too, sorta epic and mysterious and somehow fitting just right with that what-the-hell? image of a cop with a bullet in his ear (taken, the band’s explained, by photographer Carl Dunn at a Led Zeppelin concert in Ft. Worth way back when).

All that’s well and good, and what’s done is done. But as far as the bigger picture goes, Adventus isn’t a destination point so much as the Departed’s official launching pad. Last year’s This Is Indian Land was a very good album — arguably a great one as far as the contemporary Texas/Red Dirt genre goes — but it was a relatively safe album, roaring out of the gate with training wheels. It may not have been Cross Canadian Ragweed, but Cody Canada’s name in front of the Departed’s on the cover and his seat at the frontman wheel gave fans still coming to grips with Ragweed’s breakup a comforting assurance of familiarity. So did the track list, comprised entirely of covers by other Oklahoma songwriters — some better known than others, sure, but all of them long-acknowledged influences on Ragweed’s sound. Hell, prior to the band’s split in late 2010, they had already planned on recording just such a tribute album together. So for all the talk of new beginnings surrounding its release, This Is Indian Land was Canada and bassist Jeremy Plato’s way of taking care of unfinished Ragweed business with help from a pair of fellow Okies (keyboardist Steve Littleton and drummer Dave Bowen) and simpatico Texan guitarist Seth James.

Adventus is another matter entirely. It rips open with Canada singing “Worth the Fight,” a strident rocker that could have easily been the alpha dog on any of Ragweed’s better albums, but armed to the teeth with a restless urgency — “Gotta keep movin’, can’t help myself/Just wanna be someone, somewhere else” — that slams the door on the past with conviction. And then James steps up and nails it shut, delivering a commanding lead vocal with two songs in row — the smoldering “Burden On Me” and the anthemic “Prayer for the Lonely.” For the rest of the album, James and Canada split frontman duties 50/50, with the former’s soulful howl countering the later’s nasal snarl to thrilling effect. (Plato gets a turn at the mic, too, singing the winsome “Hobo,” which is interestingly the most Ragweed-sounding track on the album despite being penned by James and Bill Whitbeck.)

Some of the songs get by on more groove and attitude than standout hooks, but the aforementioned opening three tracks, along with the Canada-sung “Cold Hard Fact” and “250,000 Things” and James’ closing “Sweet Lord,” are all knock-outs. But what really makes Adventus jump out and demand attention is the wholly organic overall sound and tightness of the band. This isn’t the same old re-heated, country-fried rock that’s characterized the Texas music festival scene for the last 15 years: it’s honest to goodness, straight-up rock ’n’ roll served with equal measures of blistering blues and sweet, saucy soul, with two distinctive lead guitarists trading licks both fat and razor sharp alongside Littleton’s equally prominent piano and organ and a solid rhythm section (Plato and new drummer Chris Doege) that can turn from muscular to supple on a dime. And it all holds together without a seam in sight, even as the whole thing shifts and twists from song to song without ever settling into a predictable comfort zone.

In other words, “arrival” my ass — as far as the Departed’s concerned, this is where it all begins. Ragweed fans, chuck your baggage out the window and buckle up. — RICHARD SKANSE