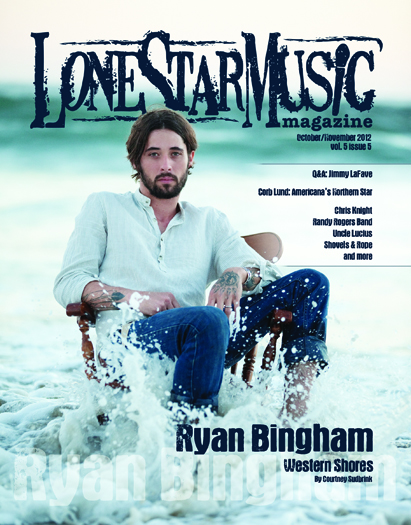 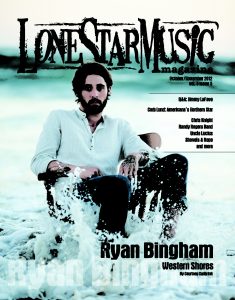 Thank you for picking up our latest issue of LoneStarMusic Magazine. I always manage to put writing my editor’s column off until the 11th hour of deadline, by which time the old word well is pretty damn dry, but it always feels great to see another one of these puppies wrapped up and delivered safely to the printer. And call me biased, because I am, but I think we’ve got another pretty good one here — chock full of news, features, and reviews on some of the best new Texas, Red Dirt, and Americana music released just in time to lift your fall and take your mind off your favorite football team’s recent 27-7 drubbing in a game that woulda/coulda/shoulda been in the bag had things not gone downhill the second they fumbled that opening kickoff return …

Oops … did I digress? Sorry. Anyway, where was I? Oh right! Well, Mr. Bingham you already know, I presume. But how well do you know him? Writer Courtney Sudbrink, founder and editor of the Americana music blog Turnstyled Junkpiled (turnstyledjunkpiled.com), caught up with the Oscar-winning songwriter way out in the sleepy Western town he’s called home ever since the recording of his 2007 album, Mescalito: no, not Marfa — Los Angeles. In our cover story, Bingham opens up about the lure of those Western shores, his formative years in Texas (from his rodeo days to his emergence as a songwriter championed by the likes of Terry Allen and Joe Ely), and the exhilarating freedom of getting to make the hardest-rocking album of his career, Tomorrowland.

In addition to our Bingham story, we’ve also got features on Canadian export Corb Lund and rising Americana darlings Shovels and Rope, plus a candid Q&A with Jimmy LaFave. In our news section, we’ve got the lowdown on the Randy Rogers Band’s forthcoming album, Trouble, plus spotlights on Guy Forsyth, Uncle Lucius, Chris Knight, and Bonnie Bishop. And further back in the magazine, we review the Departed’s hotly anticipated second album, Adventus, plus new releases by the Dirty River Boys, Jamey Johnson, and ZZ Top.  And speaking of that little ole’ band from Texas, Mr. Record Man is waiting with gleaming keys in hand to take you for a spin through the entire catalog, from ZZ Top’s First Album to their frankly fantastic new classic, La Futura. 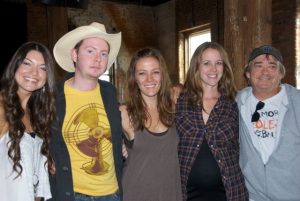 In my column here last issue, I wrote about how much I was looking forward to attending this year’s Americana Music Festival and Confernce in Nashville. Well, I didn’t end up going after all (damn these deadlines!), but Team Lone Star Music was still represented in style by our own Shilah Morrow, who put together our “LSM & Friends Present Eat, Drink & Be Kinky” party at the High Watt. I hear it was a blast, which was a forgone conclusion given the killer lineup Shilah put together: John Fullbright, the Trishas, Jesse Dayton, Kinky Friedman, Tim Easton, and Jimmy LaFave (the later two graciously filling in for the originally announced Turnpike Troubadours, who couldn’t make it due to a scheduling mixup). Shilah and regular LoneStarMusic contributor Lynne Margolis kept the rest of us rubes back home in Texas posted on all the fun they were having during their week in Music City, which kicked off with the annual Americana Honors and Awards show at the Ryman Auditorium on Sept. 12. Speaking of which, on behalf of all of us here in the Lone Star Music family, I would like to congratulate Tamara Saviano, along with her co-producer, Shawn Camp, and all of the artists who contributed to This One’s for Him: A Tribute to Guy Clark, which was named Album of the Year. Congrats (and thanks) are also due to Jason Isbell, who won Song of the Year for “Alabama Pines” and contributed this issue’s “Wax Poetic” column, writing about the influence and enduring impact that Derek and the Dominos’ classic Layla and Other Assorted Love Songs has had on his life and art.

Speaking of favorite albums and such, by the time you read this, our brand new record store — Superfly’s Lone Star Music Emporium in San Marcos, Texas — should finally be rocking, rolling, and open for business. Moving from our old digs in Gruene to our new digs right across the street from Texas State University (specifically, at 202 University Drive, site of the old Sundance Records) and getting everything up and running has been a rather Herculean task, but as I write this we’re just close enough to the finish line to visualize a whole mess of celebratory margaritas in our very near future. We can’t wait to open our doors and welcome in an exciting new era for all things Lone Star Music. Y’all come down and be apart of it, ya hear?