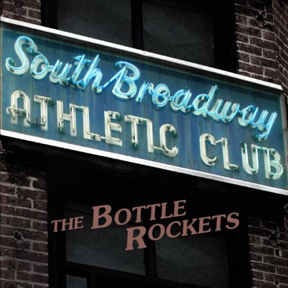 South Broadway Athletic Club sounds like an odd title for a musical endeavor until you think back to the early days of veteran Missouri guitar-slingers the Bottle Rockets; lumped in with pensive, experimental types like Son Volt and Wilco as sort of a ‘90s alt-country mini-movement, they did seem a bit like the genial jocks stuck in an art class for mandatory high school credit. Singing in plain-spoken twang about $1000 cars and gas station girls, flexing electric-guitar muscle that struck a balance somewhere between ZZ Top and Crazy Horse, Brian Henneman and company were mostly about kicking up a good-time racket in a scene that leaned towards angst. They didn’t lack depth, then or now, but hooks and good humor tend to come first with the Bottle Rockets and their latest has plenty of both. With their sound largely unchanged over the last couple of decades, they actually sound a bit more in step with the times nowadays alongside direct, relatable country-rock standard-bearers like Jason Isbell and Chris Stapleton. They’re similarly infused with the blue-collar blues (“Monday (Every Time I Turn Around)”) but have the wit and nerve to turn it on its ear with a number like “Making Chryslers,” a crunching indictment of modern greed and half-assedness that could be heard as a sidelong swipe at vacuous modern Nashville music. It’s also about as ornery as the record gets, with much of the material coming off as sunny as the middle-aged rockers’ smiles on the album packaging: even the rejected lovers on “Smile” (“I wish you’d smile at me/Cause I get frowned upon enough”) and “XOYOU” sound like they’ll be fine after a couple of boilermakers. At its most lightweight, the project still sounds like pretty decent background music for a Midwestern transmission shop somewhere, but as it eases past the halfway point it grabs an extra gear of relevance and personality. Closing things out with “Shape of A Wheel,” Henneman resiliently drawls “I’ve been a square and I’ve been a star … I’m a wheel no matter what shape I’m in.” Long may he roll. — MIKE ETHAN MESSICK