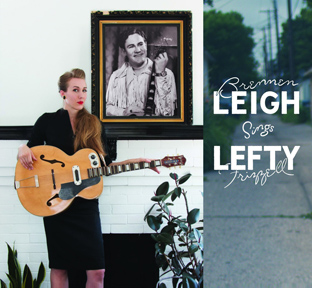 That title alone should sell this thing. Admittedly, Brennen Leigh Sings Lefty Frizzell may not have quite the superstar ring to it that To Lefty From Willie had back in 1977, but as any fan acquainted with Miss Leigh’s music can testify, this woman knows from country. The Austin-based singer-songwriter also knows her way around bluegrass, folk, and old-timey roots music (as proven across myriad projects over the last 13 years going all the way back to her salad days in her native Minnesota), but it’s a testament to both her keen instincts as a performer and the sincerity that imbues this album from first note to last that you really don’t hear any of that other stuff here. This is 100-proof unadulterated classic honky-tonk, and as pure and lovingly reverent as tribute albums get.

Granted, sincerity and purity of intent were just as much at play when Willie Nelson put together his tribute to Frizzell, who died in 1975 at the too-young age of 47. But however influential the late singer, songwriter, and contemporary of Hank Williams was to Nelson when the Red Headed Stranger was developing his own signature voice, To Lefty From Willie, released at the height of the Outlaw country boom, still sounds far more like a “regular” Willie record than an overt salute to another artist or era; the songs may have all been Lefty’s, but there’s no mistaking that acoustic guitar, that voice, and that band (most notably sister Bobbie on piano and Mickey Raphael on harp) as anything other than Willie being Willie. By contrast, guitarist Leigh and her own band of aces (guitarist Noel McKay, upright bassist Brad Fordham, drummer Lisa Pankratz, lap steel player Chris Scruggs, pedal steel/Dobro player James Shelton, pianist T. Jarrod Bonta, fiddle player Andy Lentz, and harmonica player Ted Roddy) take a decidedly more faithful, almost method-acting approach to the original source material, with classic honky-tonk arrangements one can imagine Frizzell himself singing along to as naturally as breathing.

The inherent danger with playing these things too faithfully, of course, is tripping over the line between revelatory tribute and paint-by-numbers tribute act. But Leigh is too fine a singer and charismatic a performer for that to ever be an issue; she sounds right at home — and having a blast — singing every song without having to change so much as a pronoun from “she” to “he.” It helps, too, that the track list avoids the easy lure of just covering the hits. “I Love You a Thousand Ways” is here, along with “Mom and Dad’s Waltz” (the only two songs also covered on Willie’s album) and “Saginaw, Michigan” (Lefty’s last No. 1 hit), but Leigh also shines a light on a fistful of less familiar delights that encourage and point the way toward a deeper exploration of Frizzell’s catalog. Scanning the credits, a stickler for details might quibble that Lefty himself didn’t even write most of these songs, but who cares? If the greatest honky-tonk singer in country music history saw fit to have a little fun with the likes of Mel Tillis’ “What You Gonna Do, Leroy?” and Harlan Howard’s “My Baby is a Tramp,” they’re all fair game for Brennen, too — with equally charming results. — RICHARD SKANSE