The Bigsbys: “Good Will Suitcase” 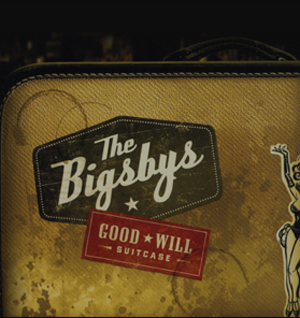 The new album from Palestine, Texas-bred foursome the Bigsbys (none of the members have Bigsby in their name) has a ton going for it. Good Will Suitcase was produced by Southern-rock ass-kicker Jonathan Tyler and recorded in Denton’s Echo Lab with Centro-matic’s Matt Pence manning the soundboard, so the group was in very capable hands from the start. The material’s strong, too. Lead vocalist Alex Smith wrote most of the songs, including the Band of Heathens-channeling “No Trouble,” while Tyler co-wrote the jubilantly jangling “Can’t Keep You Waiting.” There’s also a Ryan Adams cover, which in theory is a bit cliché for an Americana band these days, but “Crazy About You,” from Whiskeytown’s Pneumonia, is both an intriguing pick and a perfect example of the kind of grounded, meat-and-potatoes country-rock love song that the Bigsbys’ do so well throughout the record. They can also kick things up a notch, as shown by “Everything,” which features a beat-heavy, call-and-response chorus brightened by frenetic keys. The proceedings come down a bit for “Hallway,” with acoustic strums and raw drum hits giving the tune depth. Throughout the album, the sparse production allows the individual elements to shine on their own, making every track an organic success. With Good Will Suitcase, the Bigsbys can stop hunting for their breakthrough statement: It’s in the bag. — KELLY DEARMORE

Next post Jere Lowe: "Cars Trains and the Wind"