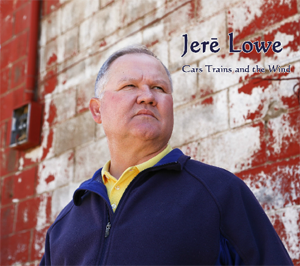 When Texans get to bragging about the Texas-sized musical talent pool of the Lone Star State, the go-to examples cited are usually the legends and giants of the household-name variety (even if only in households in Texas). But while Texas certainly has those in abundance (legends and braggarts), perhaps an even greater argument for its musical richness is just how much real talent falls through the cracks or all-to-often goes unrecognized, all the gifted songwriters and singers and musicians playing regionally or even cutting quality albums that warrant a lot more attention than they usually get. Artists, in other words, like Lubbock’s Jere Lowe, whose self-released 2013 album, Cars Trains and the Wind, is testament to the pleasant surprises laying in wait for those willing to seek out the good stuff flying way beneath the radar. Now, that doesn’t mean that Lowe’s some novice wunderkind recording demos in his bedroom; the Plains native has worked in music in one manner or other for the better part of four decades, and though this is only his debut album (or at least it appears to be based on his website), it certainly doesn’t sound lo-fi or amateurish. Co-produced by Lowe and guitarist Steve Phillipp, Cars Trains and the Wind is rife with appealing and crisply recorded acoustic arrangements and top-notch instrumentation by, among others, accordion player Joel Guzman and, on pedal steel and dobro, Lubbock’s own Lloyd Maines. Lowe holds his own, too, with a strong singing voice and 10 quality original Americana tunes that wouldn’t sound out of place at all on a West Texas playlist alongside the likes of the Flatlanders and the Maines Brothers. Highlights include the dusky “You Can’t Take Away the Wind,” the lovely “West Texas Girl,” and especially the delightful “Bilingual,” which makes terrific use of Guzman’s Tex-Mex accordion in painting a slice-of-West-Texas-life cut from the same cloth as Terry Allen’s Lubbock (on Everything). — RICHARD SKANSE