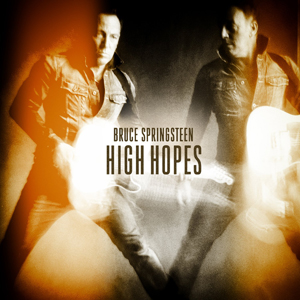 In the liner notes to High Hopes, Bruce Springsteen says he wanted to give these stray songs their proper due. But after close to five decades of writing, it’s a wonder his attempts to corral orphaned tunes isn’t more akin to herding stray cats. You’d think there would be so many, they’d be bouncing off each other in 20 different directions. But Bruce himself has been heading in one musical direction for so long now, there’s far more cohesion in this collection than one might expect — perhaps even more than he’d sought. Because the Boss has become so invested in preaching the gospel of rock ‘n’ soul, his music has taken on a more spiritual tone than ever – both lyrically and in arrangements that would be totally at home in, say, the Rev. Al Green’s Full Gospel Tabernacle Church in East Memphis.

The expanded E Street Band sounds an awful lot like a gospel choir in “Heaven’s Wall” and the Celtic-toned “This Is Your Sword,” both of which begin with pulpit-like commands. Springsteen’s other love, the Phil Spector wall of sound, jumps to the fore as well, particularly in the early-60s girl-group throwback, “Frankie Fell in Love,” which conjures visions of Bruce in a pompadour and rolled-cuff jeans (fingers crossed for the Fallon version). It’s a bit overdone in his cover of the Saints’ “Just Like Fire Would,” which goes from the hook’s hot R&B groove to Sgt. Pepper’s horns. Throwing everything against the wall to see what sticks is not always ideal. But when it works, as in the title song, complete with guitarist Tom Morello’s staccato anvil strikes and “Theme from Shaft” wah-wah action, the music pulses with energy.

Of course, Springsteen also knows the power of less. “The Wall,” his subdued song for a friend lost in Vietnam, carries stark beauty. He attributes its inspiration and title to his friend Joe Grushecky, who also co-wrote “American Skin (41 Shots),” one of Bruce’s most affecting songs.

Grushecky and Springsteen have shared inspiration for decades. Morello, his newest muse, takes “American Skin” and “The Ghost of Tom Joad” to another level. On “Ghost,” he wails, rather than shreds – until his fingers explode like a bomb, scattering notes everywhere as if they were shards of glass.

In the end, Bruce safely rescues these strays, and gives them the respect they deserve. The fact that he relied on friends old and new to do so lifts High Hopes even higher. — LYNNE MARGOLIS

Next post Various Artists: "Looking Into You: A Tribute to Jackson Browne"