Various Artists: “Looking Into You: A Tribute to Jackson Browne” 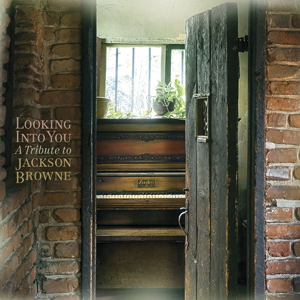 VARIOUS ARTISTS
Looking Into You: A Tribute to Jackson Browne
Music Road Records

Tribute albums can be such tricky affairs. When honoring a departed titan or revered craftsman whose songs became bigger hits for others (say, John Hiatt or Guy Clark), they can be lovely homages to singular talents or useful reminders of an artist’s impact. But when they represent an icon whose body of work is ingrained in our psyches — say, the Beatles — or one who continues to create vital art (a la Dylan and Springsteen), the matter becomes more complex. Is it better for contributors to stay so true to the originals, there’s little point? Or should they veer far from familiarity, and risk turning a classic into something alien?

For charity projects, these questions become secondary. But Music Road Records’ Looking Into You: A Tribute To Jackson Browne exists because label owner/co-producer Kelsey Warren is a major fan with the means to attract top talent, from Bruce and wife Patti Scialfa, duetting on “Linda Paloma,” to Browne’s old L.A. Mafia cronies Don Henley (with Blind Pilot), Bonnie Raitt and David Lindley. Lucinda Williams, Ben Harper, Bruce Hornsby, and many notable Texas artists, including label partner/co-producer Jimmy LaFave, are among the other contributors to this 23-track collection. Lyle Lovett even appears twice; they couldn’t choose between “Our Lady of the Well” and “Rosie,” so both made it. (Of course, the double-entendre-loving Lovett had to handle “Rosie”; adding original “Section” players Leland Sklar and Russ Kunkel, plus Peter Asher, was a nice touch.)

Several moments of excellence exist on this effort, co-produced by Tamara Saviano (who also helmed This One’s for Him: A Tribute to Guy Clark and the Grammy-winnng Beautiful Dreamer: The Songs of Stephen Foster). Paul Thorn treats “Doctor My Eyes” with respect; Keb’ Mo’ adds light funk to “Rock Me on the Water”; Eliza Gilkyson (with John Gorka) brings gospel to “Before the Deluge”; and Kevin Welch and the McCrary Sisters give a loving, elegant rendering to the title song. The Springsteen duet charms, with Patti sounding a bit like Emmylou Harris.

But the disappointments weigh heavily. Each artist handled production independently, and with few exceptions (Shawn Colvin, Joan Osborne) they over- or underdid it. Most added far too many extraneous or inappropriate elements. But the worst crime is taking a song like “Running on Empty” and stripping it of all its urgency, momentum and hell-yeah-we’re-exhausted-but-let’s-rock joy. Bob Schneider’s slow, overly glossed treatment sucks the life out of this classic. The missing piece throughout much of Looking Into You is Browne’s spirit. Yes, he’s the king of earnest singer-songwriters, but the guy knows how to kick a song into gear. This tribute, sadly, does too much running on empty. — LYNNE MARGOLIS