Terry Allen: “Bottom of the World” 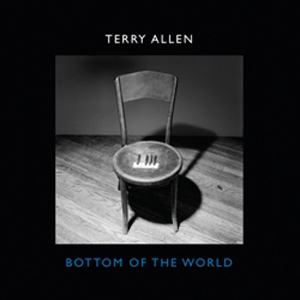 Although he’s hardly been sitting idle in the interim, having produced two major multi-media art and theater works (Dugout and Ghost Ship Rodez), it’s been 13 years since the last time Terry Allen focused his formidable creative energies toward a brand new album of songs. That’s a long time to leave fans waiting for a fix, but all is forgiven from the first notes of Bottom of the World, the Lubbock-reared agent provocateur’s 11th album and first of the 21st century. Like 1999’s Salivation (and a handful of his other albums) before it, it’s visited by the restless spirit of his 1975 debut, Juarez. The album opens with the bittersweet sigh of “Four Corners,” which sounds more haunted than ever courtesy of co-producer Lloyd Maines’ keening pedal steel. But Bottom of the World harkens back to Allen’s first record not just by revisiting one of its songs, but through its minimalist arrangements. That’s not to say the album sounds raw or under produced; quite the contrary, it’s steeped in atmosphere, filling any space it’s played in with an indigo blue, twilit ambiance and the kind of flickering shadows that keep you looking back over your shoulder. But in stark contrast to the full-tilt swagger of his albums with the Panhandle Mystery Band, the ensemble here is scaled back to just Allen (vocals, keyboards), Maines (guitar), Richard Bowden (viola, mandolin), Brian Standefer (cello), and Allen’s son and daughter-in-law, Bukka (accordion, B3) and Sally Allen (vocals). As such, there’s nothing on Bottom of the World with quite the gonzo, honky-tonk punch of past stompers like “The Heart of California” and “The Lubbock Tornado,” but the trade-off is an intimacy that underscores the enigmatic mystery, wit, and heart (yes, heart) of Allen’s lyrics. In “Queenie’s Song,” a true-story account that co-writer Guy Clark recorded on his own The Dark album a decade ago, Allen vows vengeance on the son-of-a-bitch that killed his dog, but the aching sincerity in lines like “New Year’s Day in Santa Fe broke me when it broke cold” betray a sense of inconsolable loss that resonates stronger than his anger. “Covenant,” dedicated to his wife Jo Harvey Allen, is a concise (just over two minutes) testament to undying friendship and love — and the sweetest song Allen’s recorded since, well, the last one he dedicated to his other half, Lubbock (on everything)’s “The Thirty Years Waltz.” Rest assured though, this ain’t no album full of love songs: “Emergency Human Blood Courier” is as fraught with tension as a Mexican standoff, and “The Gift” examines the tragic legacy of notorious Wall Street fraud Bernard Madoff — as paid by the felon’s oldest son. And of course there’s wry humor here, too: Leave it to the writer of “Gimme a Ride to Heaven” to not only ponder spiritual questions like “Do They Dream of Hell in Heaven,” but also muse, in “Bottom of the World,” “Read some awful things about Cuarnavaca/Sounds like the place to go.” Put it all together and you’ve got a quintessential Terry Allen record. They may not come around as often as they used to, but when they do, they give you everything he’s got. — RICHARD SKANSE