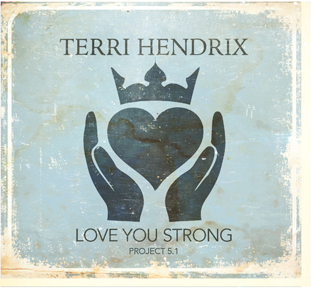 The common perception of the lullaby is that of a simple, gentle tonic before sleep. But conceptually, the lullaby emerges from darker matter. They’re sung for reassurance, which implies a certain anxiety, before entering a state of uncertainty. That explains why so many old school lullabies are creepy. Others are bluntly honest. Place Terri Hendrix’s “Love You Strong” in the latter category. The song’s foundation rests in reassurance, seemingly from one elderly person to his or her spouse, though that strong connective tissue is hardy enough to bind people of any age. “I’m in it for the good times, I’m in it for the bad times,” she sings. Too often that balance isn’t addressed. But Hendrix’s song is built upon it.

“Love You Strong” serves as more than the title song of Hendrix’s new album. It feels like a mission statement for the first of several releases (four albums and a book) that the Texas singer-songwriter plans to issue this year in a thematically linked collection she calls “Project 5.” On the subject of balance, Love You Strong is among the most gentle sounding albums she’s ever made, but it’s also the one informed most by rigid resolve and determination. Love, here, is not something caught in stages of bloom as much as it is in the less traditionally romantic space of something that endures.

It’s fitting, then, that the album opens with percussion playing the part of a heartbeat in a song titled “Feel the Time,” a title that feels counterintuitive, like lassoing the wind. “The day wakes up and it runs away to the moon,” she sings. Time untethered will run you down, so the song is a call to take the intangible and make it something you can feel and control. Honey tasted, wheel taken, the album is running, the instrumentation fleet yet understated.

The remainder of Love You Strong — produced by Hendrix’s longtime music partner Lloyd Maines — is contemplative, honest and, at times, funny (“The Rant,” “Fifty Shades of Hey”). “Vulnerable” speaks of the too-often suppressed anxiety people feel during the times of the year they’re supposed to be basking in familial love. “I wish the holidays brought out the best in me,” Hendrix sings. The line is a story and a song on its own. Of course, endurance has its limits, especially in Texas in the summer: The up-tempo “The Rant” opens with a can-do declaration (“If the toilet blows I’ll fix it …”) that gets quickly undermined (“If the AC goes I’m gone.”) But at the times when carrying on seems most difficult, a sense of grace arises, especially “Calle de los Ninos,” about a family that last sees a young son as he leaves home for school. The song’s opening lines are devastating: “He digs a grave in his Sunday best, he says a prayer where his child will rest.”

Moments little and large cycle through time and again. They’re handled with elemental restraint and details that are relatable, whether they’re mundane or wrenching, and tied together with a recurring theme of resilience that comes to a quiet but assured head near album’s end on both “Earth-Kind Rose” and “Found.” Hendrix will no doubt need plenty of that resolve to finish her ambitious plans for “Project 5,” but her 20 years experience of running a successful career on her own wholly independent terms speaks to her track record, and Love You Strong finds her off to an encouragingly strong start. Without resorting to overstatement, once again she manages nevertheless to make a profound and strong statement. — ANDREW DANSBY