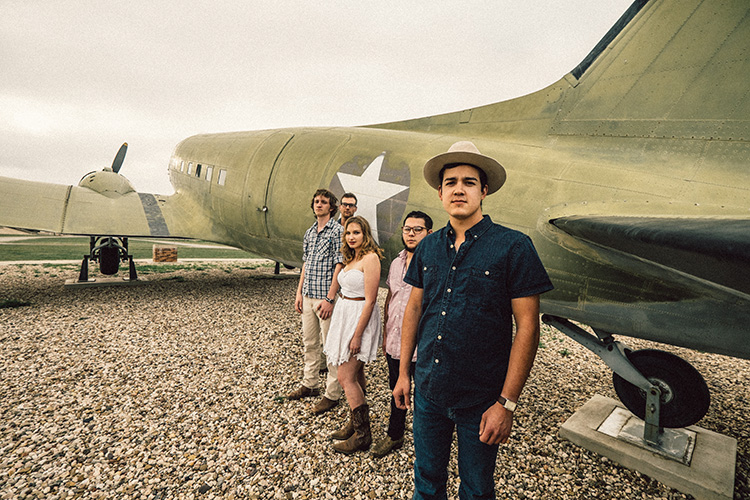 “I hate being cliche like this,” says Cleto Cordero, the chief songwriter and frontman for Lubbock’s country roots band Flatland Cavalry, “but summer is my favorite time of the year. Throw some sunglasses on. Roll down the windows and let some wind blow through. Listen to some music. Well, why shouldn’t it be us? Let’s give them something to listen to.”

It’s a logical thought process from the 23-year-old singer-songwriter — especially when that notion rang true last year with the release of the band’s first EP, Come May. All summer long in Lubbock, it wasn’t uncommon to hear Flatland’s songs blaring out of open car windows up and down University, Broadway, and Buddy Holly Ave.

On the surface, Come May captures the raw simplicity of young love without the consequence of tomorrow, but there’s something more serious brooding within that Flatland Cavalry address as well in Cordero’s compositions: Love is easy up until the point that it’s not. It’s when one party begins to take things more serious than the other when the complexity of a relationship arises. It’s not Cordero being naive when he’s scrolling through the possible scenarios of “Ain’t Over You Yet” or when he’s wishing, waiting, and hoping in “Missing You”; it’s him ultimately coming to terms and acceptance — much like Evan Felker does in one of the Turnpike Troubadours’ best loved songs, “7&7.”

The cool jet of fresh, crisp air on Come May comes from guitarist Reid Dillon and fiddler Laura Jane, who supply the country twangs, chugging licks and sawing fiddle. The rootsy groove of Jason Albers and Jonathan Saenz is as pure and cunning as Cordero’s anthemic singalong choruses. It’s a mix of Turnpike Troubadours’ heady lyrical output and Americana tones with the folk-pop sensibilities of the Avett Brothers and Dawes.

Although the EP is not quite a year old, Flatland Cavalry is already ready to move on to their next project. “I didn’t want to sit on [Come May] for two years trying to milk it for every last drop,” says Cordero. Earlier this month, the band released the first single, the cold and dark “February Snow,” from their upcoming album, tentatively titled Humble Folks. The sharp fiddle is the burning lantern the band’s huddled around as they push further into darker territory. It’s the antithesis of Come May’s “Summertime Love,” where Cordero’s come to the harsh reality of bearing the long, cold, and dark winter alone. Button up your coat, the stormy winter is coming soon.

“That’s not ‘Summertime Love’ Kid anymore,” Cordero admits with a chuckle. “I was just stuck on this image of February snow falling. I’d gone through this breakup. I’d asked her, ‘Do you even still love me?’ and she said she didn’t know.’”

Sometimes an “I don’t know” is worse than a flat-out no. But it’s what got the ball rolling. That sad sinking feeling cuts to the core with restless lines like “I gave up counting on sheep, I just stare at the door until I fall asleep, and I pray that one day you might come through.”

Humble Folks is currently slated for a spring release. With songs like “Tall City Blues,” “Coyote,” “Traveler’s Song,” “Stomping Grounds,” and “Devil on My Back” — already staples of their live show — and the recently penned “Humble Folks” all ready for recording, the band’s showing the promise that they’re about more than just hot summer nights, cigarette habits, Adderall kicks, and weekend flings. The full-length album will be revealing a whole other facet of Flatland Cavalry — one that Cordero calls “Flatland Folklore” — in which he explores the Panhandle and West Texas through character sketches, fresh tall tales, and modern myths.

“All the songs, I’ve thought of them as snapshots,” says Cordero. “I love how Turnpike Troubadours is able to do that.” Adding color to those snapshots are a couple of special guests added to the Cavalry ranks, at least in the studio: Texas singer-songwriter William Clark Green and Oklahoma City’s Kaitlin Butts both contribute duet performances to the record.

Though it’s somewhat more polished and undeniably grounded in the present, it’s not too far from the previous Lubbock songwriter generation of Joe Ely, Butch Hancock, Jimmie Dale Gilmore, and Terry Allen. Right now, that’s Flatland Cavalry straddling that line between town and country out in the rich soil of the Panhandle and badlands of West Texas and the humble, earnest folks who inhabit the land.