Austin native Suzanna Choffel may not have finished out the last season of NBC-TV’s The Voice as the show’s “winner,” but like previous Texas contestants Nakia and Curtis Grimes, the independent singer-songwriter did come away from the experience with a major boost to her national exposure. Celebrity judges Adam Levine and Blake Shelton both spun their chairs around for Choffel’s blind audition, hooked by her country-tinged folk-pop version of Stevie Nicks’ “Landslide.” After choosing Shelton’s team, she went on to survive her “battle round,” a duet on Florence & the Machine’s “Dog Days are Over,” but was eliminated during the “knockout round,” for which she sang Bob Marley’s “Could You Be Loved.” When all was said and done, though, she definitely made an impression, as shown by RollingStone.com’s comment: “Choffel was one of the only singers on anyone’s team this season who had the sort of voice you’d want to listen to for an entire album.”

Voice fans certainly will hear more from Choffel, who now commutes between Austin and Brooklyn, where the former Texas State University student and Austin critic’s favorite moved in late 2011 with former Momo’s owner Paul Oveisi. After appearing with her Voice teammates on Shelton’s Christmas album and holiday TV special, she’s touring, working on her third album (the follow-up to 2011’s acclaimed Steady Eye Shaky Bow), to be released this year, and occasionally singing at Oveisi’s hot new club, Zir Zamin. Here, she gives the 411 on The Voice. 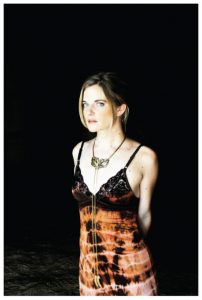 What made you decide to try out?

I thought, “I have nothing to lose.” If I don’t make it on, no big deal. If I do, it’s incredible exposure. I had reservations because you have to do cover songs; you can’t do original music. But I still thought I could show who I am; I could showcase my voice and open new doors and gather some new fans. I’m really glad I did it. I was overwhelmed by the support.

Did you go in trying to win?

Not really. You get more competitive the longer you’re on it. That blind audition, you’re just trying to get somebody to turn. You’re competing against yourself. Then the battle comes along and it’s hard. I was really good friends with Lelia [Broussard], my battle partner. She’s a fellow singer-songwriter. She lives in Brooklyn, in my neighborhood. I really wanted to win [that round] but I had a hard time being competitive with her. I was bummed to lose my knockout but I had to look at it in this grateful way of, I wasn’t even sure if I was gonna get on the show. The fact that I got on and got three wonderful performances that attracted millions of new fans, that’s amazing.

What did you have to agree to once you got on?

You have to block out the next few months of you life. The Voice is pretty cool in that they’ll still let you do shows. But once you’re on, you can’t talk about it because it’s pre-filmed [until the live rounds]. It was really hard keeping all these secrets.

I read they give you the option of your own wardrobe but you liked their selections better.

Yeah, totally. That dress I got to wear on my battle round created quite a conversation on Facebook. It’s this amazing Rachel Zoe dress that I would have never been able to afford. And they let me keep it! They try to get you whatever you wore if they can.

It was really cool. Blake was really down to earth. He’s hilarious; an awesome guy — just a good ol’ boy from Oklahoma. He’s not as technical as Adam or Christina, but he’s good at helping you get stronger on your song. The biggest thing I took from him was in my battle round. He was like, “You’re kind of a chameleon with your voice. You tend to become this character. Try to stick to your own true voice.” I appreciated that; I do have a tendency to do that. I think he’s intuitive.

What career boost has it given you so far?

Album sales have increased, for sure. New fans, obviously. It’s going to allow me to go to new cities that I have not toured in before because now I have fans [there]. As for A&R and label exposure, I had a few meetings. The show is like free A&R. A label that may be unsure about me or how I perform, they can look at the The Voice stats and [see], “She did really well and people liked her, and she looks great onstage.” I feel like these reality shows are the new form of A&R. The labels get a chance to see how the artist does before they make a decision.

That Rolling Stone quote, you couldn’t have paid for.

Exactly. Say you paid 20 or 30 grand for an incredible PR campaign. Instead of that, you go on The Voice and you get paid to watch your career evolve into a national fan base.

Yeah, you’re paid for your time on TV.

What were the highs and lows?

The highs, getting all the exposure, getting tons of new fans. Overnight, my Twitter feed and Facebook just exploded. And getting to work with these incredible entertainers. The lows would be not getting to do your own songs. The song choices are limited. It’s not like you can just choose any song.

Some of the reality stuff gets weird. They painted me as a music teacher who barely did a show in her life. That was awkward, but I am a music teacher during the day and I’m OK with that. And they made me look very positive. I got quite a response on my audition, saying, “Oh, finally, not a sob story. The girl who teaches and has a positive outlook on music and life and she’s here to do her thing.” I prefer that to, “Oh, I’ve been struggling to make this music thing work for years and it’s just not happening.”

Did you choose to be eliminated, as Rolling Stone suggested?

I was certainly not trying to commit musical suicide. Marley was definitely one of my song choices, but it was my last one. You had to submit four or five songs you wanted to sing [from their list]. I put Cyndi Lauper, Madonna; I had all these other, bigger songs, and they gave me that one. But I was excited when I got it. I thought it would show off my voice, and my vibe.

The only reason I thought I probably couldn’t and wouldn’t win is that I don’t sing those big songs. I think I have a good voice and I’m talented, but … these powerhouse belters, I don’t do that. And I’m OK with that. I feel like I went out strong. I will say I was really upset that at my knockout performance, Cee-Lo gave me a lot of praise [and] said, “Suzanna Choffel, she’s got star power.” And they took that out! If they’re gonna make you lose, at least say something cool about you.

I think they’re looking for someone who is a bit more moldable, a younger artist. I can see why; it’s a coaching show. And I’m already pretty solid in my shoes as far as knowing who I am as an artist.

It was a mixed bag for me but overall, it was a really positive thing.