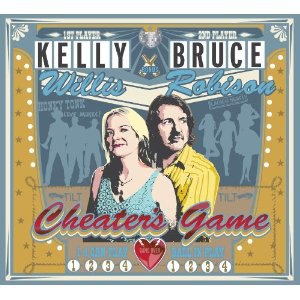 Bruce Robison and Kelly Willis’ creative paths have been intertwined for years, but save for a holiday EP they’ve never really done the classic country him/her record. Five years after her last solo album and four years after his, the husband/wife duo have finally come around to making an album together, but it’s actually not a classic country him/her record — at least not one following the old George Jones and Tammy Wynette playbook, with a vintage-sounding exchange of lines. Instead, Cheater’s Game achieves the same casual comfort of Willis’ and Robison’s solo albums, with songs largely steered by one voice and colored by their harmonies, which continue to nestle together with ease and aching beauty. The song selection, as is typically the case with these two, is impeccable, with smart covers from songwriters like Hayes Carll (“Long Way Home” is an album standout), Don Williams (“We’re All the Way”), Dave Alvin (“Border Radio”) and Robert Earl Keen (“No Kinda Dancer”). Robison wrote more than half of the tunes, including the title track (a co-write with Savannah Welch and Liz Foster that the Trishas featured on their 2012 album, High, Wide and Handsome). His originals are, for the most part, steeped in the kind of longing and boozing that suits their voices. “After all,” he wrote and she sings on the title track, “rock bottom’s not too far down.” — ANDREW DANSBY