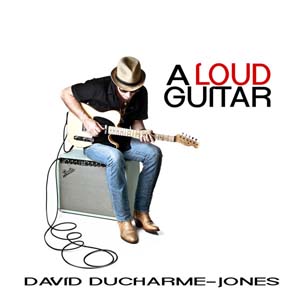 David Ducharme-Jones plays a mighty fine loud guitar. But it’s much more than the decibels emanating from his Marshall stack that make A Loud Guitar such a sonic treat to the ears. Ducharme-Jones showcases a pro’s pro prowess up and down the fretboard as well as a sumptious breadth of styles and influences. Clearly, he graduated with honors from the College of Musical Knowledge — majoring in Diverse Originals and minoring in Somewhat Obscure Covers. Among the seven of the former, standouts include “Left Undone,” a turn-it-up-loud answer song of sorts to the Stones’ long ago suggestion that time would always be on our side. By singing along with Ducharme-Jones (and just try not to), you’re buying into the suggestion that the sands are a-fallin’, so get your ass a-movin’ and stop bein’ so freakin’ responsible. And if Connie Briton doesn’t find a way to put “Welcome to Nashville” over the opening credits of her new ABC hit, well, her Friday night lights aren’t nearly as bright as I thought they were. There are lyrical allusions to everyone from Kris Kristofferson, the captain of the Titanic, David Allan Coe, Harlan Howard and a host of other Nashville cats in this roadhouse-tripping rocker about a band’s hard-luck attempt to get noticed in Music City (“I told the hotel clerk about my band’s show in town tonight, he said ‘Lemme guess, John, Paul, George and Ringo, am I right?”) Ducharme-Jones also reaches deep into his peach crate of aging vinyl for a pair of inspired covers: the spaciously rendered Traffic classic, “The Low Spark of High Heeled Boys,” and a wistful “I Am a Diamond (Anyway)” by fellow Tex-Iowan BeJae Fleming. A man who’s made music with — and for — countless others over the years, Ducharme-Jones steps out of the shadows of his amp stack with A Loud Guitar that both screams and ever-so-gently cries out to be heard. — D.C. BLOOM