Steve Forbert: “Over With You” 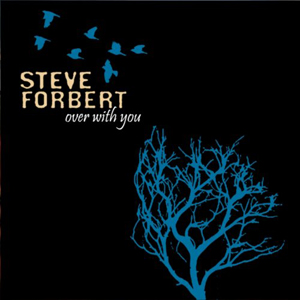 STEVE FORBERT
Over With You
Blue Corn Music

There’s a bit of irony that the new Bob Dylan album (Tempest) and this new Steve Forbert album were both released on the same day. Early on in his career, the Mississippi-born Forbert was dubbed “the new Dylan” — just like dozens of other artists over the years, from Texas’ own Mouse and the Traps to John Prine and Bruce Springsteen. Although flattering and bestowed with good intentions, the designation is invariably as much of a curse as it is a blessing, because, let’s be real, real Dylans come around about as often as Democratic Texas governors see Halley’s Comet. Forbert persevered nonetheless, though because he never came close to achieving the same level of fame as Springsteen or Prine, his career has been woefully under appreciated for three and a half decades. Outside of the fans who’ve followed him faithfully since Alive on Arrival in the late ‘70s, most folks probably only know Forbert for “Romeo’s Tune” or, thanks to the inevitable nasty spillage every few years, “The Oil Song.” Well, it’s high time for this master songwriter to get another blast of attention. Over With You is an endearing and enlightened collection of 10 exquisite songs that speak with the wisdom of someone who knows quite well that things often don’t turn out as hoped; that even the best relationships are in constant states of precarious balance, and that when people do drift apart, it can be done with tenderness and dignity on all fronts.

The title track — one of the most mature kiss-off ballads you’re ever likely to come across — makes this point with Forbert’s signature phrasings and anguished, unique vocal stylings: “Keep this in the back of your remarkable mind/Somethings don’t make sense and some are so hard to find/Over with you, over and through.” The bouncing “Baby, I Know” ruefully acknowledges the tendency to fall short of expectations 10-percent of the time and cheerfully promises to do better. And Ben Sollee’s sympathetic cello is the perfect complement on “Don’t Look Down, Pollyanna” as Forbert commiserates about life’s ebbs and flows and dizzying high-wire acts. But it’s “All I Need to Do,” the up-tempo, off-kilter head-nodder of a love song, that will remind longtime fans of what they’ve always loved about Forbert’s realistic optimism and hopefully help introduce him to a few new ones. “All I need to do is just find someone who’s just like you,” he proclaims. “All I need to change is just the seven letters of your name.” It’s been years since it was suggested that changing the seven letters of Forbert’s own name could give the musical world a new Dylan, but we’re lucky he’s still around helping us get over the fact that he’s not and never really cared to be. — D.C. BLOOM