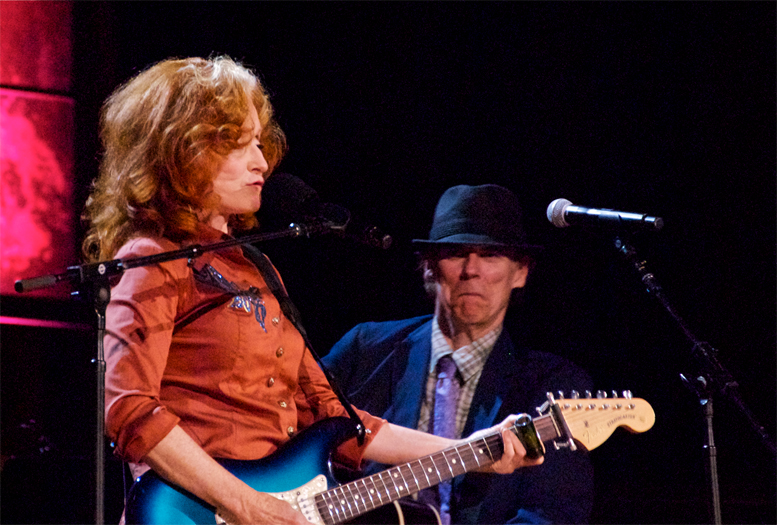 Love” at the Ryman Auditorium. (Photo by Lynne Margolis)

Even though emcee Jim Lauderdale didn’t utter “Now that’s Americana!” until halfway into it, the 11th annual Americana Music Honors & Awards, held Sept. 12 in Nashville, once again earned its status as a favorite among awards shows — especially after This One’s for Him: A Tribute to Guy Clark was named Album of the Year. 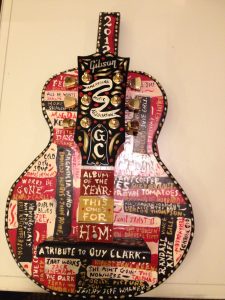 The AMA Album of the Year award for This One’s for Him: A Tribute to Guy Clark. (Photo by Tamara Saviano)

Just before Rodney Crowell announced the winner, Texas native Clark and guitarist/songwriter Shawn Camp appeared on the Ryman Auditorium stage to perform “My Favorite Picture of You.” “This is for my wife, Susanna, who died in June,” Clark said softly. “I wish she could hear me, but I’ll play it for her anyway.” The moving moment became even more so when Tamara Saviano, who co-produced the tribute album with Camp, repeated Crowell’s album-opening comment, “‘Let’s give ’er a go and make old Guy proud,’” adding, “I hope we did. Guy, this one’s for you.” 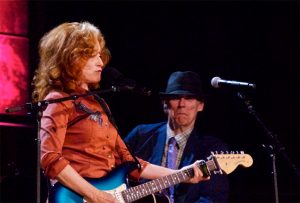 Love” at the Ryman Auditorium. (Photo by Lynne Margolis)

This One’s for Him, featuring Clark covers by more than 30 artists (many of them Texans), was the first compilation album to win an AMA award. The evenings other winners were: Gillian Welch (Artist of the Year); the Civil Wars (Duo/Group of the Year); Alabama Shakes (New/Emerging Artist of the Year); and Jason Isbell (Song of the Year, for “Alabama Pines”). Lifetime Achievement awards went to Booker T. Jones (Instrumentalist), Richard Thompson (Songwriting), Dennis Lord (Executive), and Bonnie Raitt (Performance). Accepting her award from pal John Hiatt, she later mentioned how his song, “Thing Called Love,” helped make her career. Then she called him onstage to duet on it, saying, “John, this one’s for you.”

But it was the night’s finale that left many in the audience teary-eyed. After mentioning three recently fallen musical giants — Joe South, Earl Scruggs and Doc Watson — Lauderdale said, “We lost another dear friend this year. He was a man with such art and soul, and he was really kind of a guy who defined Americana music.” As Thompson, Alabama Shakes’ Brittany Howard, Sam Bush, Emmylou Harris, Amy Helm and Dirt Farmer Band member (and house band member Larry Campbell’s wife) Teresa Williams joined Hiatt, Raitt and the house band onstage, Lauderdale yelled, “This one’s for you, Levon!”

Their soulful performance of “The Weight” was a fitting finish to an evening full of special moments. And that was just the first night of the 12th annual American Music Festival and conference; myriad showcases, seminars  and parties continued through Sunday. In addition to many of the winners, nominees, and presenters from the Awards show, artists performing throughout the week included the reunited Mavericks, Billy Joe Shaver, Buddy Miller and Lee Ann Womack, Kasey Chambers and Shane Nicholson, Brandi Carlile, the Wallflowers, Tift Merritt, Paul Thorn, Reckless Kelly, the Trishas, John Fullbright, Amanda Shires, Corb Lund, Shovels and Rope, the Mastersons, the Dunwells, Charlie Faye, Sons of Fathers and more.