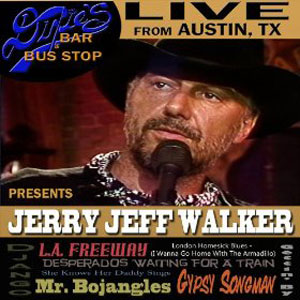 This 1984 performance, available for the first time as both a double CD and a DVD, finds ol’ Scamp Walker sober and fronting a pretty dang good band featuring a couple of Lost Gonzos (Bob Livingston and John Inmon) along with Mike Hardwick and Freddie Krc. It’s a good selection of material from what we now know was the heart of his career. The DVD and the CDs feature exactly the same track list, but the DVD is the way to go; it gives you an undoctored view of what Walker was like onstage at the time. The video quality is charmingly rough while the audio is just great. But although certainly enjoyable, especially for diehard Walker aficionados, this set isn’t perfect. Some of the tempos are rushed and there are times where it seems Walker clearly wishes he was somewhere else. However, that was as surely a part of the Jerry Jeff experience as hollerin’ the chorus to “Redneck Mother” was. The full-on main set (CD 1) is where you’ll find that number and most of his hits (from “Mr. Bojangles” and “L.A. Freeway” to “Pissin’ in the Wind”), but the eight-song acoustic set (CD 2) turns out to be the highlight. That’s where you hear Walker digging a little deeper into his catalog, reaching back to his pre-Gonzo days as a gypsy songman for “Morning Song to Sally” and other early nuggets that he sounds a lot more engaged in. (Not surprisingly, Walker would spend the rest of the ’80s and much of his career since favoring the solo acoustic format for his concerts.) All in all, the performance captured on Live from Austin, TX: Dixie’s Bar & Bus Stop may have its flaws, but Walker fans will find it a welcome time-capsule addition to their collection, and it serves as a pretty good introduction to Jerry Jeff for newcomers as well. Genius and indifference have skipped together down the entire path of his career. This catches a little bit of both at their respective best, making it as honest a portrait of the artist as you’re ever likely to find. — GREG ELLIS