Steve Earle: “I’ll Never Get Out of This World Alive” 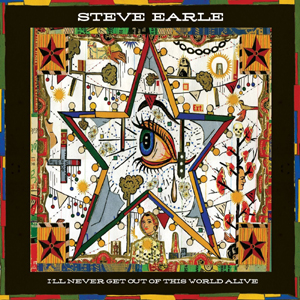 After the Grammy-winning Townes, Steve Earle’s homage to mentor/songwriting-standard-setter Townes Van Zandt, he faced the daunting task of how to return to his own skin for a record that could stand up to such sustained quality. Given Earle’s unwavering standards and fierce modern populism, the bar was set — and he took no prisoners, enlisting T Bone Burnett to gild this 11-song collection which effortlessly swings from the norteño-suggesting opener, “Waitin’ On the Sky,” and the Celtic reel of “The Gulf of Mexico” to the violin ’n’ steel-drenched declaration of self, “I Am a Wanderer.” Whether it’s the spooky reckoner’s taunt “Meet Me In the Alleyway,” with its phased vocals that sound processed through a vacuum hose, the sardonic staccato bluegrass indictment of our ruling class “Little Emperor,” or the finger-picked, Van Zandt-evoking “Lonely are the Free,” which tugs at the conscience for the real cost of freedom, Earle presses into the wasteland that so much of what America stands for has become. This is not about swagger, but the horror of seeing so much of what is brokered for what it really is.

A blue-collar activist and voice of the underclass from the first notes of his 1986 debut, Guitar Town, Earle’s never pulled punches. He is, however, also a big believer in affirming life and believing in truths greater than the bottom line or profit margin. “God Is God” is as potent an endorsement of a Higher Power as any thinking man has offered: recognizing that God has gotten him through, and also that those who purport to know God’s will betray everything the Lord embodies. At the other end of the spectrum is “Heaven Or Hell,” the full-frontal tumble into that burning ring of fire that is raw desire and all-consuming love. A close harmony duet with wife Allison Moorer, this is a stand-off of two strong-willed forces of humanity who can’t turn away and won’t succumb. The tension is a high wire — and it’s strung tight.

That ferocity is endemic of the joy herein. No matter where the songs lead, Earle romps through them with a dead-eye aim and a full-immersion read. This isn’t just a record, it’s an experience to be savored, especially by the man making it. Having considered the phases of America 2011, Earle is still crying foul, still recognizing how fortunate he is, still willing to tell the stories of the ones most people never notice. Once tagged the redneck Springsteen, the Texan expat with the bent to trouble is far more cerebral than the guy hoping for assembly-line work or dry wall hanging. But Earle knows the fighting spirit of the working class and its resilience in the face of whatever too-large odds lie before it. That perspective is what gives “This City,” his Emmy nominated theme from HBO’s Treme series, its head-held-high voice. With a brass section, another circling guitar figure and a funeral-march beat, Earle celebrates New Orleans’ refusal to give in no matter what happens. Picture postcards from the Crescent City dot the lyric that promises, “This city won’t wash away, this city won’t ever drown.”

That eternal refusal to cave is everything Steve Earle stands for. On I’ll Never Get Out of This World Alive, it stands him in a fine stead of good songs, clear vision and a voice that creaks like an oak beam that’s seen its share of tornadoes. — HOLLY GLEASON