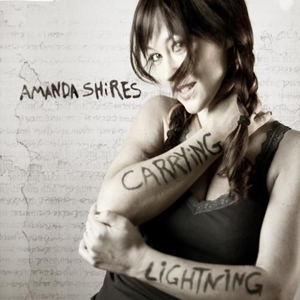 “Look how easy a heart can catch on fire,” observes Amanda Shires just over two minutes into her first song here — and by that point, it’s already too late: said heart is toast. Shires’ sophomore solo outing, 2008’s West Cross Timbers, hinted that the fiddle player for Lubbock’s Thrift Store Cowboys certainly had the makings of a promising singer-songwriter career; but the leap in emotional intensity and artistic confidence between that album and this one takes the breath away. Carrying Lightning comes on strong right from the start and burns, burns, burns hotter and brighter with each successive track and spin. The title phrase, used in the opening “Swimmer, Dreams Don’t Keep,” neatly sums up the charge of human desire that courses through the entire album, illuminating passion at every stop from its first flowering (“Swimmer”) to explosive lust (“Shake the Walls”) to sweet surrender (“Kudzu.”) As a co-producer (along with fellow songwriter Rod Picott and David Henry), Shires surrounds herself with a rock-solid cast, including guitarists Neal Casal (Ryan Adams’ Cardinals) and Will Kimbrough (Rodney Crowell); but it is very much her own performances that carry Lightning. She uses her fiddle almost exclusively for texture and atmosphere, the frayed tension within the instrument’s throaty voice (closer in spirit to fellow West Texas maverick Richard Bowden than the Playboys Western swing she cut her teeth on) proving the perfect foil to her own warm, fetching vibrato. Shires also plays ukulele and other strings, and kisses “Swimmer” with a ghostly whistle that will haunt you for days. So will the dark, restless intent laid forth in “When You Need a Train It Never Comes,” and the head-spinning, heart-quickening giddy rush of “Sloe Gin.” “Are you noticing that we’re breathing the same air, at the same time?” she marvels in a slow, intoxicating drawl. “Sloe gin, it’s not a lie/it doesn’t make things magically appear that weren’t already there.” No lie here, either: Carrying Lightning is Amanda Shires’ artistic coming of age — and the work of a woman on fire. — RICHARD SKANSE

Next post Steve Earle: "I'll Never Get Out of This World Alive"