Sterling Finlay’s “A Very Sterling Christmas Volume 2” A gift of thanks from a young Texas artist to the family, friends and community that helped him through a very trying 2015

You would not wish Sterling Finlay’s year on your worst enemy, let alone on one of the gentlest, kindest souls in Texas. In the span of nine extremely trying months, the 34-year-old singer, songwriter, and accomplished sideman lost both his father (Cheatham Street Warehouse don and beloved songwriting mentor Kent Finlay) and one of his best friends (fellow local songwriter Victor Holk). He also came very close to losing his own life. In June, Sterling was hospitalized and diagnosed with congestive heart failure, believed to have been triggered by his exposure to contaminated river water from the Memorial Day Weekend flood that ravaged the Texas Hill Country (Finlay had to be evacuated from his father’s house in Martindale during the disaster.) 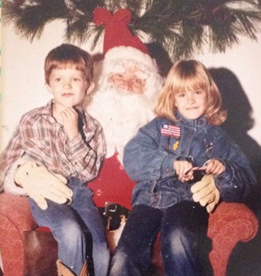 Sterling’s road to recovery has not been easy, and he still has a long ways to go. But as 2015 draws to a close, his heart, battered and bruised though it may be, remains full and his spirits high and hopeful. For proof, look no further than A Very Sterling Christmas, Volume 2, a charmingly heartfelt, unabashedly intimate collection of holiday standards and other feel-good classics that Sterling and Holk recorded together some time back over much laughter and good cheer at “The Getalong Ranch” (aka, Kent Finlay’s riverside cabin). According to his younger sister, fellow artist and songwriter HalleyAnna, the album was originally intended as Sterling’s Christmas gift to his family. But after surviving the hardest year of his life — and feeling overwhelmed with gratitude for the friends and loved ones who came to his aid with both moral support and much needed donations for his medical fund, he now wants to share that same gift with the rest of the world.

Recorded in the fireplace at The Getalong Ranch
Produced by Victor George Holk, Indie Skies