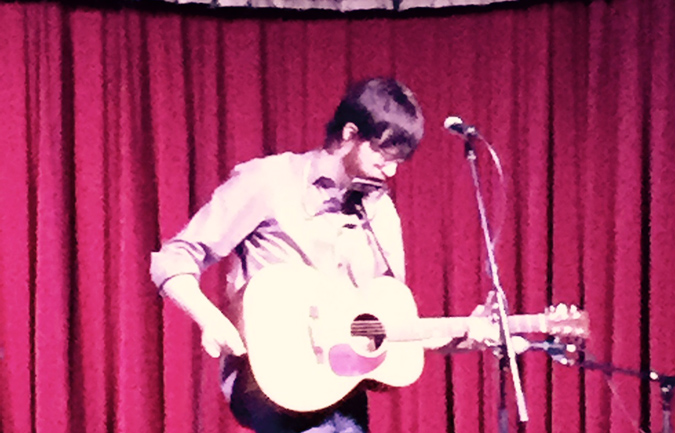 Will Sheff at Cactus Cafe (Photo by Zach Jennings)

If it wasn’t immediately apparent from the 100-deep line of folks outside of Austin’s famed Cactus Cafe, it was established early on that last Saturday’s Will Sheff concert was a homecoming in more ways than one. As Sheff recounted early on, the Cactus was actually the setting of the very first Okkervil River gig. Ever. Just a few restless and anxious Austin kids playing a bit overly aggressive for the usually tame Cactus crowd on open-mic night in the ’90s, with no idea they’d be indie-rock darlings over the course of the next 20 years.

Sheff wasn’t back at the Cactus to commemorate his band’s salad days, but rather to celebrate the 10th anniversary of  2005’s acclaimed Black Sheep Boy, the Okkervil opus thematically centered around the life and death of singer-songwriter Tim Hardin. This would be quite a bit different from Okkervil’s recent sold-out, five-night stand at the Bowery Ballroom in New York City, though; instead of having the full band play the album from start to finish, a solo Sheff was able to deviate to a more functional but slightly disorienting set list. From a logistics point of view, why hop from guitar to piano to guitar when you can make the easy segue from one piano-based track to another?

For the most part, it worked. Sheff’s flair for the dramatic has always been a highlight of Okkervil’s live shows, and even in this toned down, subdued setting his performance had the air of a one-man play moreso than an outright concert. The nine-minute “So Come Back, I Am Waiting” elicited a full-on standing ovation from the crowd and served as a poignant reminder of Black Sheep Boy‘s enduring power. A pair of Black Sheep Boy Appendix tracks proved surprisingly agile; both “Black Sheep Boy #4” and particularly the explosive, demon-exorcising “Another Radio Song” shone as highlights of the evening, with the latter turning up the drama with each rise in Sheff’s vocals throughout the jarring final crescendo. And an absolutely mesmerizing closing version of “For Real” saw the album’s most raucous rocker deconstructed into a sparse, soft piano ballad with Sheff’s vocal delivery providing the theatrics to an entranced audience.

But along with the high points, the format of the show almost guaranteed some surprises that proved a bit unsettling, at least for hardcore Black Sheep enthusiasts (which surely accounted for most if not all in attendance.) “Song of Our So-Called Friend” was a bit anti-climactic as an opener and the popular “Black”somehow prompted a mass exodus to the restroom and bar. And album standout “For Real” felt out of place not following the trailing notes of “Black Sheep Boy” and not preceding the gentle, disarming “In a Radio Song”: in much the same way as Pink Floyd’s “Breathe in the Air” feels like an extension of “Speak to Me” on Dark Side of the Moon, those three songs just belong together. Such was the inherent difficulty in what Sheff was attempting to do, as many of Black Sheep Boy’s charms lie in those deft intros/outros that segue from track-to-track and the little slices of production or background instrumentation that don’t fully unveil themselves until repeated listens. Every little tick, water drop, bird chirp, and muffled, not-of-this-world voice, cry, and bleat in the background serves a vital role in transforming “In A Radio Song” from a mere placeholder to a magnificent centerpiece on an album full of big, hooky songs.

Of course, a case could be made that in stripping all of those elements away — and shuffling the songs seemingly at random — ultimately just underscored the perfection of Black Sheep Boy‘s original sequence and finished form on record. All in all, the lasting impression of the night was one of the little record that couldn’t but somehow did succeed on most every level. At the time of its release, there was simply no way of knowing that an impressionistic “concept album” safely cushioned around Hardin on the outside, though boiling with deep and unapologetic personal and emotional currents underneath, would serve to be a defining album from one of indie rock’s most enduring acts of the past two decades. — ZACH JENNINGS