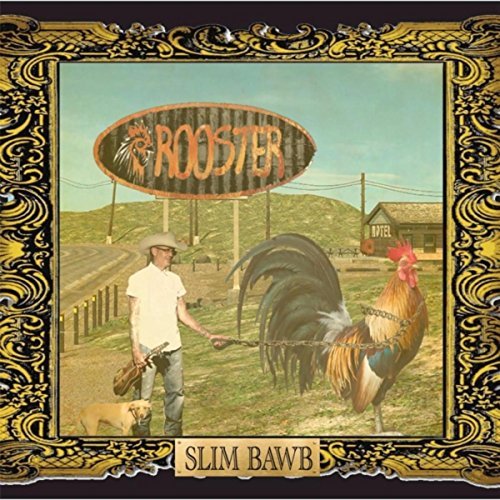 A welcome and familiar sound on stages of various size in the Texas Hill Country, Bob “Slim Bawb” Pearce has spent decades (and several self-produced albums) honing an engaging blend of blues, country, funk, folk, and Cajun mixed together so seamlessly that he’s practically his own genre at this point. Pearce has done some cross-pollinating with the Americana genre via a recent stint with the Chubby Knuckle Choir and influencing younger country artists like Jordan Minor and Troy Stone that he occasionally plays backup for, but for a generous helping of unfiltered Slim Bawb music, his latest release, Rooster, is as good a place as any for a listener to start.

His multi-instrumental chops (steel guitar, mandolin, resonator etc.) have been evident for years but his studio game has sharpened recently, finally giving his records the additional edge and clarity they deserve. Few could manage to throw both banjo and accordion on a track (the instrumental throwdown “Earl,” namely) without audience aggravation, but Slim Bawb finds the charm in just about every instrument he bends to his bayou-obsessed will. Howard Yeargan’s accordion and keyboard grooves remain an excellent complement to Pearce’s barbed-wire picking and Ron Sherrod’s boney percussion rattles; Yeargan also occasionally takes the vocal lead, giving a smoother counterpoint to Slim Bawb’s Billy Gibbons-esque growl.

Pearce & co.’s New Orleans fixations are often right there in the lyrics (opening groover “Second Line Fever,” the bilingual “Comment Ca Va,” the zydeco shout-outs on “Hotel Mini-Bar”). But they’re almost always at least implied by Yeargan’s prominent squeezebox work, plus no shortage of swampy funk (including just straight-up covering the Meters’ “Fire On the Bayou”), co-writes with Baton Rouge folkie Steve Judice, and detours into call-and-response gospel (“Build the Foundation”) and straight-up blues (“Rained On Rooster”). Good vibes prevail – even “K No Bawb Today,” cracking on the local radio station for not spinning his tunes, comes off more like a playful elbow in the ribs than a kick in the ass. Looking on the bright side of a dearth of radio singles, Slim Bawb’s particular grooves are so specific and immersive, they are perhaps best enjoyed one full album (or, better yet, concert) at a time. — MIKE ETHAN MESSICK