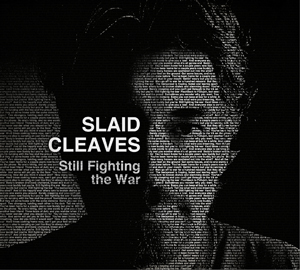 Slaid Cleaves has made a fistful of very fine albums since his migration from Maine down to Texas in the ’90s, with every release from 1997’s No Angel Knows through 2009’s Everything You Love Will Be Taken Away packing at least two or three songs guaranteed to flat knock the wind out of you. But his 2000 breakthrough, Broke Down, has long gone unmatched as Cleaves’ end-to-end masterwork — until now, that is. It’s hard to pinpoint what it is exactly that distinguishes Still Fighting the War as a truly great Cleaves album rather than “just” another really good one, though, because it’s the whole package rather than any particular song or songs that really resonates. The immediately inviting, toasty warmth of Cleaves’ voice, of course, has always been a given. Sandy but smooth, comforting and at times beautifully uplifting but always grounded with a tinge of weathered and world-weary regret, it’s one of the most distinctive and emotionally effective instruments in all of Americana. But the melodies he sings with that voice are every bit as memorable. Cleaves is a rootsy singer-songwriter who’s made his bed in the folk world, but he’s as handy at writing irresistible hooks as any pop or rock artist this side of Tom Petty. There’s not a song on this album that you can’t hum along to halfway through on the first pass, and every one of them just sinks in deeper and deeper with subsequent listens with no diminishing returns. The best of the best ones here edge out the others only by a matter of degrees. The opening title track, an empathetic look at an ex-soldier battling post-traumatic stress disorder, soars with an urgency befitting its timely subject matter. “Without Her,” “Gone,” and “I Bet She Does” are all variations on the theme of love lost, spanning the emotional spectrum from shell-shocked sorrow to jaded distance. “Rust Belt Fields” and “Welding Burns,” co-written with Cleaves’ childhood friend Rod Picott (who recorded both on his 2011 album, Welding Burns), are striking portraits of blue-collar hardship and gritty resolve. (Truth be told, Picott’s take on “Welding Burns” is unbeatable, but Cleaves’ reading of “Rust Belt Fields” is devastatingly poignant.) And there’s light here, too: “Whim of Iron” and “God’s Own Yodeler” are feel-good celebrations of two indomitable human spirits (the latter being a suitably joyous tribute to the late Texas yodeler, Don Walser), and the irresistible “Texas Love Song” is a shameless (and knowingly so) exercise in Lone Star cliché waving. In the hands of any number of younger Texas yahoos, lines like “for you I’d trade my truck in for a Lexus” would be eye-rolling groaners; but Cleaves is in on his own joke and delivers it with such playful, aw-shucks whimsy (with help from an equally game Terri Hendrix on background vocals), damn if it’s not hard to keep from grinning along with him like a fool. — RICHARD SKANSE