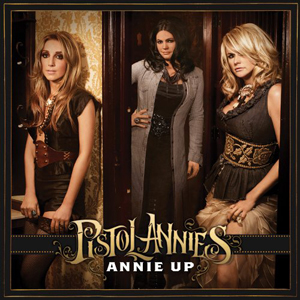 It would be easy to dismiss the Pistol Annies as the white-trash trio project for three-time Country Music Association Album of the Year winner Miranda Lambert. With strong harmony singing – courtesy of Ashley Monroe and Angelena Presley — the three girlfriends sling trailer-park clichés with some of the lushest stacked vocals since the Dixie Chicks called it a day. But where the Chicks, prior to Taking the Long Way, worked fairly wide-open emotional terrain, the Annies are more about the musical ground they can cover. From the slinky album opener “I Feel a Sin Coming On” to the acoustic campfire-lullaby “I Hope You’re the End of My Story,” Annie Up is a musical survey course that romps, bucks and coos. This is real music delivered with a naughty wink.

All three Annies pull their own weight, too. Presley delivers the torchy lament of “Blues, You’re a Buzzkill,” while Monroe’s silvery soprano caves into the weakness of resistance for “Dear Sobriety.” Then there’s Lambert’s feisty “Damn Thing,” which takes on the less than desirable aspects of who she is and swings them with a delicious, unapologetic zeal. “Being Pretty Ain’t Pretty” takes their quirky über-girliness to a chuckle-inducing place. Ditto the slide guitar-driven tale of a pipe-down, speak-no-evil Christmas dinner with a fresh-from-rehab family member, “Hush Hush.” That truth in the awkward moment is becoming the Annies’ stock in trade. But there are also moments here that feel a little closer to mainstream, like the punch and thrust, blue-collar love song “Loved By a Workin’ Man.” Ditto the shuffling “Don’t Talk About Him, Tina,” which cautions a girl who lost a boy to the rodeo that she’s better off without him. And “Girls Like Us” is a manifesto of grrrl power and friendship that plays to the strengths of Lambert’s empowering persona.

Put it all together, and Annie Up more than lives up to its name as a tweaked-expectations, high-frolic sophomore record — the exception to the rule in a world of dumber, poppier, and gloppier. To not be afraid of the truth, they only need Hayes Carll to play Charlie to their angels, and the characters sketched herein will be set for their own TV show. — HOLLY GLEASON