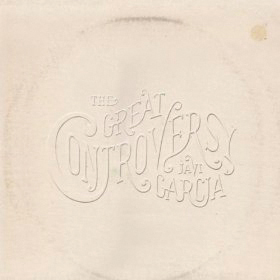 When an artist knowingly makes music that isn’t for everyone, an honest listener can at least admire their commitment to the path. Javi Garcia gleefully, savagely takes it one step further and not only leads you down the road less traveled, he threatens to burn the bridge back to where you started. Audacity comes naturally and fairly unforced to Garcia, who turned a lot of heads with his 2010 debut (a double album called A Southern Horror, no less), which was bold and often gripping but in retrospect was only setting the table for his pretty damn brilliant follow-up. On The Great Controversy, Garcia stakes a territory somewhere between vintage Rolling Stones (including the subtle shades of country music), black-hearted Misfits shout-alongs, and Americana iconoclasts like his sometime running buddies Ray Wylie Hubbard and Mike McClure. To hear him take on a first-person narrative of Satan himself as a swaggering smart-ass is to have a good chuckle tinged with fear (“I’m the seven-year itch/A year after you’re hitched/I’m the thorns on the stick/When you got hit with a switch,” brags the title track); to hear him verbally smack down both a crank-addicted prostitute and her (his?) disapproving blue-collar dad on “The Sound” is both stirringly direct and hauntingly complex. Nailing it on boozy reveries (“Fort Worthless”) and dirty boogies (“Josephine”) without a bum track in the bunch, Garcia might be on the undercard of Texas music at the moment, but dammit … he’s swinging like a heavyweight. — MIKE ETHAN MESSICK