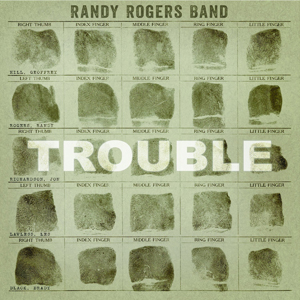 For the Randy Rogers Band’s eighth studio album, Trouble, the regionally iconic five-piece successfully spreads its wings just enough to keep long-time fans from listening on auto-pilot while still impressively managing to sound very true to proven form. Perhaps due to the presence of producer Jay Joyce (Eric Church, Cage the Elephant), the up-tempo tunes, such as “One More Sad Song” and “Don’t Deserve You,” are more revved-up and polished than some of the Rogers rockers of the past, but they never come across as blatant attempts to alter their musical identity. Plus, the stories contained in the non-heartbreak songs are possibly better than they’ve ever been for RRB. “Fuzzy,” the most entertaining tune on the album, is a gritty swamp-blaster with a storyline that, if not 100-percent based on true events on the road, still delivers as much fun as The Hangover. And if you’ve ever cared a lick about Texas country, the title track — featuring a memorable guest cameo by Willie Nelson — is damn near irresistible; Rogers and Nelson singing about shenanigans on the road with the rowdy musical fervor of a raucous rendition of “Whiskey River” is decadent black gold. And even the new songs here that trigger deja-vu do so in a way that fans are sure to love, sounding like they could’ve come from the same sessions that produced the RRB’s 2004 breakthrough record, Rollercoaster — especially “Goodbye Lonely,” which recalls “This Time Around,” and “Shotgun,” which just might be the sequel to “10 Miles Deep.” Peruse the credits, and it’s actually quite a shock to see that Rogers himself only had a hand in writing six of the album’s 11 cuts. But a good record’s a good record, and Trouble is the best album that the Randy Rogers Band has made in years. — KELLY DEARMORE