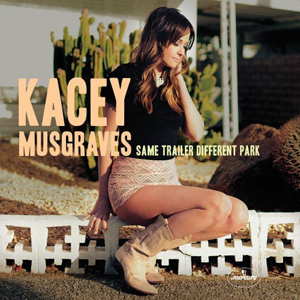 Kacey Musgraves is the perfect mainstream country music conundrum. Same Trailer, Different Park will be widely recognized as her debut, but she came to Nashville from Sulphur Springs, Texas, with three independent releases already under her belt, and the songs on her major-label bow reveal a mature artist who refuses to be beholden to either convention or the system. Willing to write about the awkward truth of real life — “It Is What It Is” is an unsentimental call to friendship with benefits — the nose-ringed songwriter leans into her craft with a little-girl innocence that isn’t afraid of what’s happening. “Merry Go Round,” her breakout single, tackles the escape routes people trapped in suburbia follow. For Mom, it’s Mary Kaye. For brother, it’s Mary Jane. For Dad, it’s Mary Down the Block. With the cautionary lyric, “If you don’t have a kid by 22 …,” it paints a picture of expectation and the inevitable succumbing of young people afraid to dream beyond the horizon line. That notion of escape is celebrated in the waitress on the lam in “Blowing Smoke,” a tale of the one server who got up the nerve to get the hell out. The others take their cigarette breaks, talk a lot of smack, then recognize all their big talk is just so much smoke. There’s the stomp ’n’ tambourine-framed “Stupid,” a smack down for falling for some guy. Sassy, and drawing on that chugging beat, Musgraves lulls the listener on the bridge, then a banjo rises up for a few plucked notes before returning to the full production. Even more pointed is the tart “Step Off,” the ultimate shutdown that’s as clever as it is infectious.

At the other end of the spectrum is the heart-protecting “Keep It to Yourself,” an almost weightless bit of sweetness that asks the gone lover to not share any notions of missing her. With a honeyed vocal, Musgraves draws the listener in with a melody that seems like falling in love, not falling apart. That sunniness also dots “Follow Your Arrow,” a song about being true to one’s nature, not expectations. Advocating smoking a joint and even kissing a member of the same sex if you want to, this is the most challenging-to-conservative-morality song to hit Nashville in years. But even though she skewers hypocrisy from the opening couplet — “If you save yourself for marriage, you’re a bore/You don’t save yourself for marriage, you’re a whorrrrrible person” — Musgraves is so plucky and the melody so catchy, the listener is swept up and lyrically invested long before the message sinks in. Co-produced by hit songwriters Luke Laird and Shane McAnally, Same Trailer, Different Park is an album that serves the songs while still building on Musgraves’ feisty independence, with a brightness to the sonics that’s as captivating as her writing. A breath of fresh air, indeed. — HOLLY GLEASON

Previous post Guy Clark: "My Favorite Picture of You"