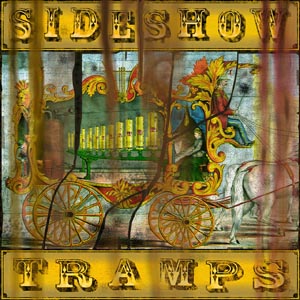 Perhaps no band represents the eclectic, free-ranging musical tastes of Inner Loop Houston more than the Sideshow Tramps. The band’s second album in its 10-year tenure approaches music like Jimmie Rodgers, Louis Armstrong, Lightnin’ Hopkins, and Django Reinhardt stumbling into an all-night gypsy party — it’s no coincidence the opening track is a romp-stomping carnival barker tune called “Here Comes the Party” that is part invitation, part warning — and swaggers from genre to genre like Gogol Bordello on a bender. In fact, along with inventive arrangements and stellar musicianship, the strongest aspect of Tramps and Freaks is its stubborn insistence on refusing to be bound by genre considerations. Inventive, mind-bending covers of traditional blues songs like “John the Revelator,” “See that My Grave is Kept Clean,” and “In My Time of Dying” intersect with a sly honky-tonker titled “Only a Drop Left,” a slinky, deceptively happy bluegrass tune about a heroin addict, “Hambone’s on the Needle Again,” and “Shady Little Girl,” a punk rocker that explodes like a quasar. Never ceasing to wander musically, the album also beautifully manages moments where metal guitars shred over the gospel styling of members of the Houston Symphony Choir while timpanies explode in the mix, Dixieland toodles make their way into a rocker, and a jaunty party track becomes a dangerous dirge. Welcome, tramps and freaks, to the new sound of Houston. — WILLIAM MICHAEL SMITH

Previous post Another ACL Festival (No. 10) in the books, date set for 2012 edition