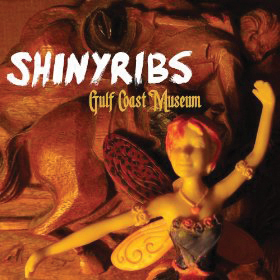 Usually a side project is an opportunity for an artist to get a bit more indulgent and adventurous than his normal meal ticket allows. But for a guy like Kevin Russell in a band as freewheeling, versatile, and democratic as the Gourds, it’s less about going out on a limb than about exploring another branch with a killer rhythm section (Keith Langford and Jeff Brown) and an indispensable keyboardist (Winfield Cheek). If anything, his Shinyribs muse actually takes him to even more accessible places on occasion, such as the straightforward, John Prine-ish love lament “Somebody Else” or the downhome funk of “Texas Talking.”  Still, the usual Gourds approach of wry, vivid non-sequiturs prevails in his writing, sometimes in a wildly joyous fashion (the big, earthy groove of “Bolshevik Sugarcane” finds him shouting out “Antique! Newlywed! Mozambique! Infrared!” for no other obvious reason than it sounds cool), and sometimes just to color up a narrative either internal (the introspective “Sweeter Than the Scars”) or external (the breezy jam “Take Me Lake Charles”).  It’s a lyrical license made all the more palatable by the fact that Russell is more or less the best male vocalist alive (RIP Levon Helm), blessed with not only twangy range but a stirring emotional intelligence in his delivery. Witness “Song of Lime Juice & Despair,” where he spits impressionistic lyrics with sort of a forlorn urgency before breaking into an extended, wordless yodel alongside Ben Safer’s minor-key clarinet riffs. It’s abstract, kinda out-there, but never nonsense as it melts into the time-stopping closer: a cover of Harold Melvin & the Blue Notes’ Kenny Gamble and Leon Huff-penned R&B classic “If You Don’t Know Me By Now,” strummed on the ukulele and sung in close harmony with Brandy Zdan. — MIKE ETHAN MESSICK