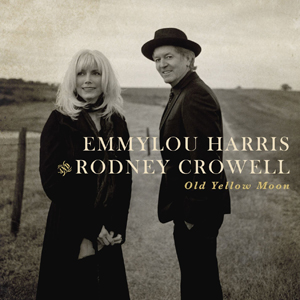 When Rodney Crowell was a member of Emmylou Harris’ Hot Band in the ‘70s, his designation was “backup singer.” Not this time around. On Old Yellow Moon, they’re full-fledged collaborators, sounding like the best of old friends on a variety of tunes including four he wrote. Except for Albert Lee, just about every other Hot Band member or contributor shows up here, too, enriching tracks that range from uptempo classic country (“Hanging Up My Heart,” “Invitation to the Blues”) to the regret-tinged ballad, “Open Season on My Heart.” They stir it up a bit with “Black Caffeine,” going down low and dark, as if they’ve been hanging in True Blood country. It’s soundtrack-bound, for sure. “Bluebird Wine,” a Crowell composition from their first go-around, has a jaunty feel enhanced by his boost to co-lead vocalist. They also give Matraca Berg’s “Back When We Were Beautiful” an aching beauty. On that one and the title tune, their hurt-filled harmonies blend so well, it’s a wonder they’ve let so many years go by between recording sessions. Old Yellow Moon, produced by Brian Ahern (one of Harris’ ex-husbands) reinforces why she and Crowell became musical royalty — and why both remain on their respective thrones. — LYNNE MARGOLIS

Next post Jason Boland and the Stragglers: "Dark & Dirty Mile"