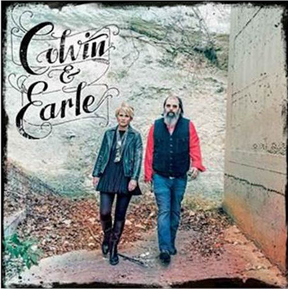 Not since Fleetwood Mac’s Rumors has a song been as fraught with romantic frisson, tension and betrayal as “You’re Right (I’m Wrong).” For Steve Earle and Shawn Colvin, two troubadours in the hard-rode tradition of making music and taking it on the road, it is as much a siren’s call of the rootlessness that drives them as the reality that all relationships eventually come undone.

Without blinking, the pair manage an uneasy tandem — equal parts moan and drawl over a buzzing guitar undertow and a creeping beat. There is no excuse, no remorse, only a dogged recognition: “Every man only wants mercy, every woman only wants hope/ Every time I ever did wrong, you forgave me/I wondered if I had enough rope.” In the cinders, there is still the ghost of fire. In the almost chanted chorus, the droning yearn for a notion isn’t enough to pull them home. And in that moment, Colvin & Earle finds its elevation. They are not fatalists, merely honest witnesses to the tides of humanity they’ve seen and heartbreaks they’ve lived.

On the fragile “The Way That We Do,” a series of images cascade down like feathers in a pillow fight. Each has their memories, their little notions, and it seems so gentle, but then the song flows and you realize beyond the endearing details, there’s the rogue’s truths — “nobody listens to a lie like you,” “walking on wire, feet to the fire,” — in the mundane rhythms of quasi-coupledom. Even the ghostly “You’re Still Gone,” featuring the duo’s most tender singing, suggests that the stains of love never quite wash out. If there is the clash of reality, the memories sustain and remain … and perhaps temper regret with knowing.

Working with Americana’s saving grace Buddy Miller, this a textural meeting of minds, long on the folk roots both Colvin and Earle have fashioned careers from since they cut their milk teeth in the ‘70s. Whether the neo-hippie gospel of “Tell Moses,” the easy-going campfire feeling “Happy and Free” or the almost folk/country of “You’re Still on My Mind,” Colvin & Earle is a survey of the music that sculpted them.

Though the covers of John D Loudermilk’s “Tobacco Road” — a little too churning, not quite enough spark — and the Rolling Stones’ “Ruby Tuesday” — a little too limp and wrist to forehead angsty — falter, the sweeping take on Emmylou Harris’ “Raise the Dead” finds the joy in being consumed. “Dead” draws on the rock/country/soul tragedies as a metaphor for the love that will kill and the music that tempers everything that comes from it.

If Springsteen is right — that the whole world’s on the road tonight and there’s nowhere left to hide — then Dylan offers the benediction here: to live outside the law, you must be honest. Refusing to gussy it up, the Grammy-winners seek — and find — a rough-hewn take on writing, picking and singing that offers up the splinters and rough spots as the real sacrament of how life gets sanctified. Beyond merely NPR hipster fare, there is a true consideration of life lived, love torn, miles endured and the realities in that wake. Colvin & Earle is a romantic survivors’ unflinching Bible — and well worth the deeper listen. — HOLLY GLEASON