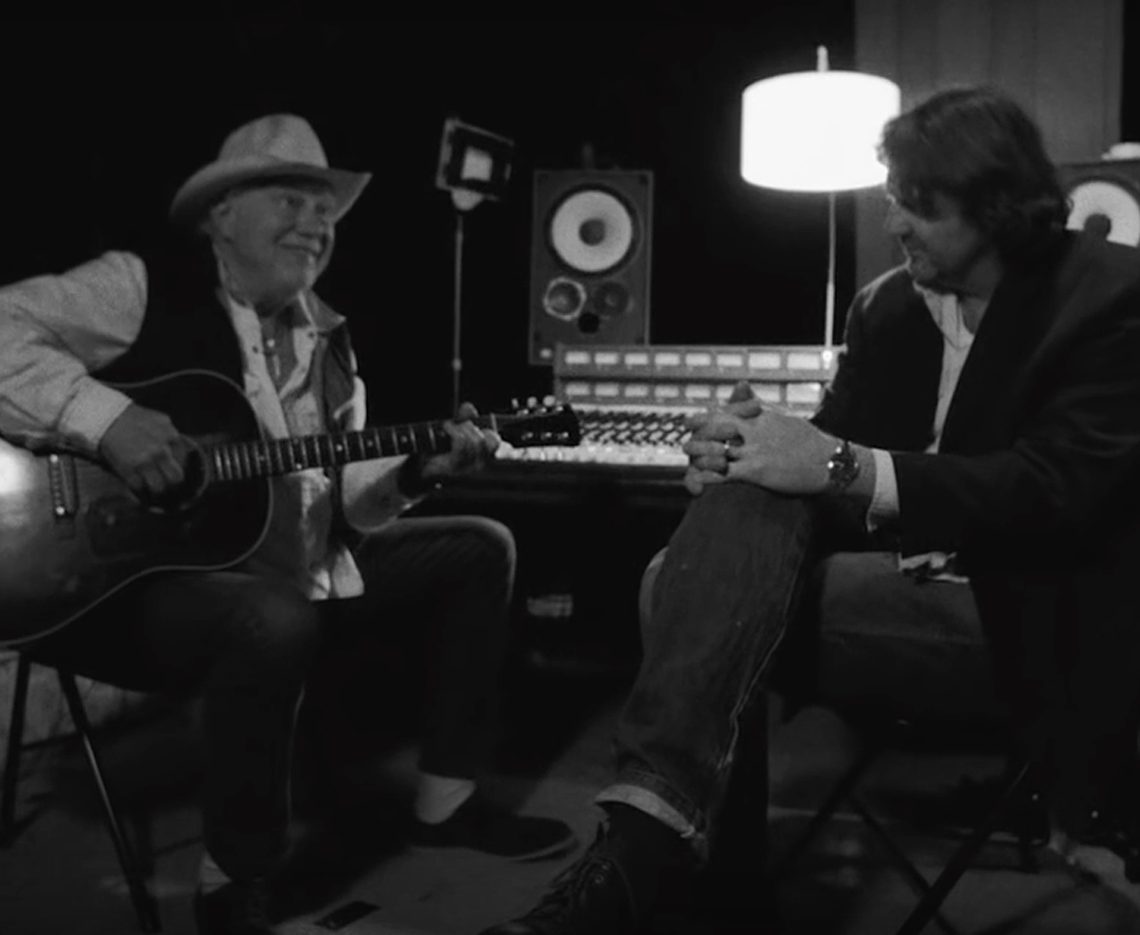 Bruce Robison interviewing Jerry Jeff Walker on the first episode of "The Next Waltz." (Screen grab from Spencer Peeples film)

In the 23 years since the release of his debut album, Bruce Robison has had ample opportunity to sample just about every dish available on the big buffet that is a professional career in country music. He’s put out records as an independent Texas troubadour, had a 15-minute fling with a major label,  dabbled happily in producing, built his own recording studios, and even watched a handful of his songs get carried to the top of the charts in the hands of some of the biggest names in the business.

Not a bad run (so far) — but it’s his latest endeavor, an ambitious passion project he’s named the Next Waltz — that may well prove to be the Bandera-born singer-songwriter’s crowning achievement.

“It’s been about three years since I’ve been involved in this thing, and it’s been very invigorating,” says Robison, who turned 50 last weekend but enthuses about his new baby with boyish excitement. “The Next Waltz really lit a fire again.”

Make that several fires, given that the Next Waltz is a multi-faceted project bringing just about all of Robison’s musical interests under one big tent. In a nutshell, it’s a website (www.thenextwaltz.com), internet TV show/video podcast, online radio station, and a record label — albeit one at present and  focused exclusively on producing digital-only singles, all of them recorded and mixed analog as all get-out at Robison’s new(ish) dream studio in Lockhart, Texas, Bruce’s Country Bunker.

The way it all works is, Robison and his Next Waltz team — including filmmaker Spencer Peeples — invite artists of the country/Texas/Americana persuasion out to the studio to film a short biopic/interview and to record a brand new single, usually with Robison’s own hand-picked Muscle Shoals/Wrecking Crew-inspired regular cast of ace Austin players. The recording of the song is filmed for its own video, and all three pieces — biopic, song video, and downloadable single — are then posted to the site and shared as far and wide as the web can carry them, from YouTube and iTunes to Apple Music, Spotify, Amazon and Google Play. “We are going to make these songs available in every sort of way you could want to consume them, download or streaming,” says Robison. “We’re saying yes to every bit, everywhere.”

The first Next Waltz “episode,” which premiered this week, spotlights progressive country legend Jerry Jeff Walker, who recorded a new version of Rodney Crowell’s “A Song for the Life” (a song Walker first recorded on his 1977 album, A Man Must Carry On.) Going forward, new episodes and singles will be added every three weeks. According to Robison, other artists who have already visited the Country Bunker to film and record include Crowell, Jack Ingram, Turnpike Troubadours, Wade Bowen, Randy Rogers, Sam Outlaw, and Robison’s wife, Kelly Willis.

“The response from all the artists so far has been amazing,” says Robison. Ditto the support of the Blanco, Texas-based Real Ale Brewing Co., which jumped at the opportunity to be the Next Waltz’s title sponsor.

“They loved the idea right away,” says Robison, noting that finding the right sponsor, far from being an afterthought, was key to the whole big picture from the get-go.

“What I say flat out is, I believe that the music business has been disrupted so badly that all the solutions can get really complex,” he says. “But the elevator pitch for this thing is is that sponsorship needs to pay for the music itself. But you still have to do it with the proper care that went into it back when you could spend $200,000 on a record 40 or 25 years ago; the quality still needs to be there. And because the music itself is not going to make much money, that sponsorship needs to be the thing that helps us get to that high level.”

The pairing with Real Ale, he says, “makes perfect sense.” “It’s a local company, they’re wonderful people who make a high-quality product, and I can’t do without beer,” he offers with a laugh. “So you know, it was a no-brainer, really.”

With beer money helping to keep the lights on and wheels in motion, Robison and Co. are able to keep quality at a premium on the creative side. Robison likens the format of the interview shorts to a music-focused Inside the Actor’s Studio and Jerry Seinfeld’s popular web series Comedians in Cars Getting Coffee, but as filmed and edited by producer/director Peeples, the look of all the video pieces is several cuts above the average YouTube channel feed or late-night talkshow. He notes that The Band’s Martin Scorsese-helmed concert film The Last Waltz inspired the project in more ways than one.

“When you watch The Last Waltz, you go, ‘This is the greatest thing that ever happened!’” he says. “But it’s not just because of the music — it’s the way it looks and the way it feels in showing that music. If you look at whatever music clip was taped for last night’s chat show and compare it to The Last Waltz, it’s very similar to comparing streaming to listening to a record from 1975. You just look at that film and think, ‘Why does this look so beautiful and feel so artistic?’ It’s the songs from the start, for sure, but there’s so much more to it than just that. And Spencer’s own artistic approach to these things we’re doing is an enormous part of the whole deal. He’s like a mad scientist the way he shoots and puts everything together. He finds the story in every one we do and is there whenever the right thing happens. Then he sends them over for me to approve, and I don’t ever even have to suggest edits. I’m like, ‘That’s better than I could have imagined. Let’s go with it!’”

While Peeples works with state-of-the-art digital video and editing equipment, the audio side of the Next Waltz is decidedly old-school by proud design. A decade and change ago, Robison sunk a good chunk of his royalties from such hits as “Angry All the Time” (Tim McGraw) and “Travelin’ Soldier” (Dixie Chicks) into a high-end studio in Austin, Premium Recording. He loved it for a spell, in particular the natural reverb chamber, but he ended up selling it a few years later and moving shop to Lockhart, determined to build an even better mouse trap.

“This is actually the third studio space that I’ve built,” he says of his Country Bunker. “There’s just this sound in my head that I’ve been chasing forever. And it’s really … I hate to say painful, but there’s this feeling you get that is painful when you build and spend a bunch of money on a digital studio, and it ends up sounding the same as everywhere and everybody else and it’s just not what you’re looking for. But this one I’ve got now … there isn’t one computer within the entire recording setup, and it feels great. I don’t miss any of that stuff at all, and we rarely even use the technology possibilities that we do have with the old stuff we’re using: we don’t really ‘punch in’ very much. We have it set up to where you’re getting a performance, and once the performance is there, you don’t have to mess with it much. The whole process is so simple that it really colors what we do. I just feel like there’s never been a better way to capture this kind of music.”

Although Robison has his hands full orchestrating and launching the Next Waltz, his own music hasn’t fallen by the wayside. Among the singles currently in the pipeline for premiering on the site is a new song of his called “Sweet Dreams,” and he’s about to head out on a short duo tour with his wife, beginning with a show at Austin’s Moody Theater Saturday night with John Fullbright.

“We’re doing about three weeks, including some shows over in Europe playing for new people in places we’ve never been before, which I’m really excited about,” he says. “Performing’s always been my thing, too — I never wanted to be just a songwriter or just a musician or just a producer. All those things I find to be really cool and creative. This is a really good gig I have — I love this gig.”