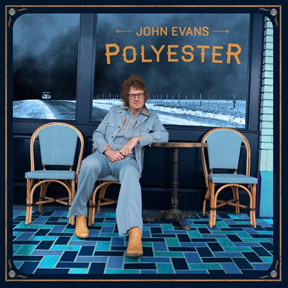 Veteran Houston-bred, Austin-based musician John Evans may not be one of Texas music’s best-known names, but despite his eclectic style shifts throughout the years, he is one of its most distinctive and unforgettable. Similar to other rootsy experimenters like Robbie Fulks or Kevin Russell, Evans has no lack of conventional chops — the man can write, pick, and bust out a twangy croon with the best — but his imagination takes the sort of wild detours that reward the adventurous listener. Evans bends and blends pretty much every genre he touches; he’s blasted out borderline-punk rock ’n’ roll and catchy honky-tonk in the past, but Polyester in particular is steeped most noticeably in colorful psychedelia and sweet, reflective country-folk. They’re not incompatible, especially on the evocative centerpiece “Sweet Dreams,” a gauzy meditation on travel and loss with Evans’ uber-talented companion Emily Bell’s background vocals lending an alchemy that’s spooky and heartbreaking all at once. There are sunnier moments to be had — the hard-rocking fuzzbomb of the title track, the ’60s throwback singalong of “Instant Society” — and even at a more languid pace, Evans conveys warmth and hope on songs that seem simple on the surface but may be the most personal work we’ve ever seen from him. “Grandma’s Chair” could have come off hokey in lesser hands, but there’s a subtle balance of family history and forward motion in the narrative and, once again, a layer of backing vocals ups the emotional resonance; a few rounds of wordless “whoa, whoa, whoa,” artfully placed, conveys another level of happiness and resilience. A self-producer unafraid to go big (check out the Tom Waits-ish craziness of “Dust Bowl” or the classic pop of “Love Note”), he still shines on something as relatively straightforward as the steel-laced country waltz that closes out the record. “Life ain’t so bad/It’s the best life that we’ve ever had,” he sings, and it’s also possibly the best record he’s ever had. — MIKE ETHAN MESSICK