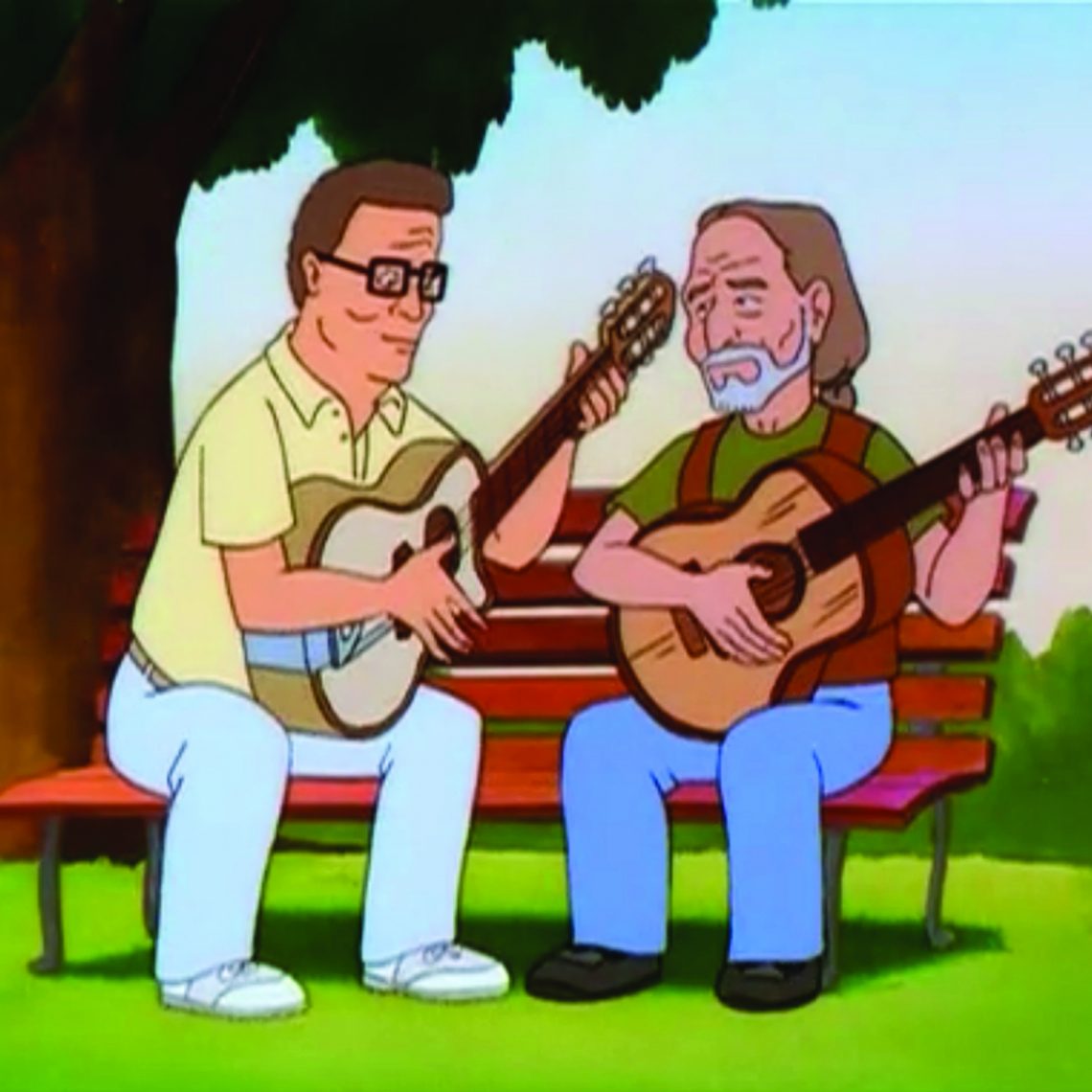 Although it was hard to keep up with The Simpsons’ seemingly endless arsenal of big gun cameos (U2, the Ramones, Johnny Cash, Aerosmith, R.E.M., Metallica, Michael Jackson, the White Stripes, three different Beatles and even Spinal Tap, to name but a handful), Mike Judge’s King of the Hill hosted its own fair share of A-list musical guest stars over the course of its 13-season run. And, true to the show’s spirit, most of them were as Texan as an ice cold can of Alamo Beer. With apologies to flugelhorn maestro and Mega Lo Mart mascot Chuck Mangione, here’s some our favorites. 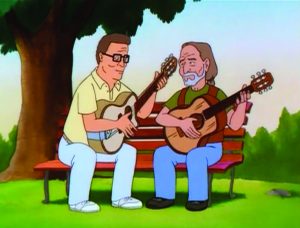 King of the Hill established its solid Lone Star credentials early on, roping in none other than Willie Nelson for a starring role in the fourth episode of its first season. In it, the Willie-worshiping Hank Hill is mortified when his son Bobby accidentally hits Nelson in the eye with a flying golf club. Luckily, Willie’s Pedernales Ranch just happens to be a child’s bike ride away from the Hill household — Arlen, Texas, is just kinda magical that way — so Bobby manages to not only apologize to the Red-Headed Stranger in person, but score his folks an invitation to a Willie family BBQ (at which Hank gets to pick guitar with Willie, and Dennis Hopper tries unsuccessfully to put the moves on his wife, Peggy). 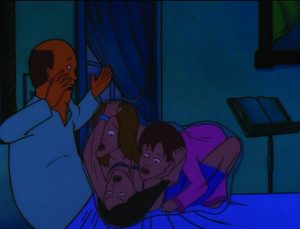 When Hank wins an Alamo Beer contest that involves a trip to New Orleans for a Cowboys/Saints football game, slovenly neighbor Bill (Stephen Root) tags along to pay a visit to his wealthy Louisiana aunt Esme and her vixen-ish daughters Lily, Rose and Violetta — played by Martie Maguire, Emily Robison and Natalie Maines of the Dixie Chicks. Two of the women are widows of Esme’s sons and thus related to Bill only by marriage, but all three put the moves on him because he’s the last eligible bachelor of the Dauterive bloodline. Much hilarity ensues — and the side plots are pitch perfect, too. The episode also stars Meryl Streep (as Bill’s aunt) and Cowboys legend “Dandy” Don Meredith. “We really loaded that one up, didn’t we?” marvels Judge. “That was Jim Dauterive [writer, no relation] at his best. I should watch that one again.”

Most people would probably be inclined to brag a little if they were related to a world-famous rock star — but not Hank Hill, upstanding, God-fearing family man and proud seller of propane and propane accessories. “Son, every family has its secrets,” he tells Bobby with a heavy sigh before popping in a videotape of ZZ Top playing “Sharp Dressed Man.” “You see Bobby, I have this cousin named Dusty …” Naturally, Bobby’s thrilled, but Hank is less than chuffed when cousin Dusty and his bandmates Billy Gibbons and Frank Beard pay a visit along with the crew of a reality TV series, Behind the Beard. “I had met Dusty Hill back when I played bass with Doyle Bramhall,” says Judge, who later recorded some Beavis and Butt-head footage that ZZ Top used on tour. “A friend of mine, Clay Tarver, suggested, ‘You should have it where Dusty Hill is Hank’s cousin, but he never mentions him.’ So that was something we’d wanted to do on the show for a while, but didn’t get around to it until near the end of the run.”

After years of being unlucky in love, Peggy Hill’s niece Luanne (played by actress Brittany Murphy, who died at age 32 in 2009 shortly after King of the Hill’s last season was completed) finally finds the love of her life in Lucky, a hopelessly white trash bumpkin with limited smarts but a heart of gold. The character, who made his first of several appearances in Season 8’s “The Redneck on Rainey Street,” bore an uncanny resemblance to a certain Florida-born rock ’n’ roll Hall of Famer. “I didn’t draw that character, but when [executive producer] John Altschuler was trying to describe Lucky to the designers, he wrote a note that said, ‘He looks like Tom Petty without the success,’” Judge recalls with a laugh. “And then we thought, ‘Let’s see if we can actually get Tom Petty to do the voice.’ And Tom said, ‘I love the show, I’ll do it anytime you want,’ and as it turned out, he actually meant it. We made him a regular member of the cast, and he’d come to all the table readings, just completely low key and not carrying any kind of rock star pretension. But I’d sit there thinking, ‘That’s Tom Petty!’ I remember doing a read with him one time, then getting in my car, turning on the radio and hearing ‘Free Falling.’ And I thought, ‘I just did a table read with that guy. Life is good.’”