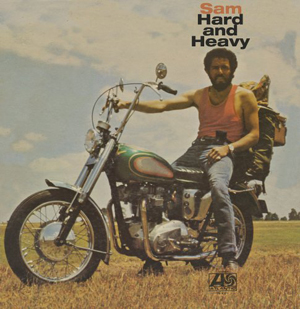 File this one under “Lone Star Nuggets.” In his ’60s days fronting Sam the Sham and the Pharaohs, Dallas-by-way-of-Memphis wildman Domingo “Sam” Samudio specialized in absurdist garage-rock that carried both a pointed outsider edge and a gritty musical sensibility that underlined his blues, R&B and country roots. Those roots are prominent on this newly reissued 1971 solo effort, which finds Samudio convincingly reinventing himself as an edgy contemporary bluesman, striking a tougher, edgier tone while maintaining the quirky iconoclasm of his prior work. With savvy studio vets Tom Dowd and Jerry Wexler producing, and soulful support from the Jim Dickinson-led Dixie Flyers, guest guitarist Duane Allman, the Memphis Horns and the Sweet Inspirations, Sam, Hard and Heavy sustains a loose, vibey atmosphere that’s well-suited to the raw immediacy of Samudio’s sly vocal drawl. His performances here feel organic and personal, even when he’s tackling such familiar numbers as Big Bill Broonzy’s “Key to the Highway,” Randy Newman’s “Let’s Burn Down the Cornfield,” the Doc Pomus/Ray Charles chestnut “Lonely Avenue,” and a horn-propelled take on Otis Rush’s “Homework.” The real revelations, though, are such offhandedly inspired Samudio originals as “Relativity,” “15% ASC,” “Don’t Put Me On,” and the psychedelicized shouter, “Starchild.” The album’s original 10 tracks are augmented on this release by a countrified reading of Kris Kristofferson’s “Me and Bobby McGee,” recorded during the album sessions. Although it made little impression on a world that probably would have preferred another “Wooly Bully,” Hard and Heavy is a one-of-a-kind winner that lends perspective to its creator’s better-known work, while leading the listener to wonder what other treasures this pioneer of Texas rock ’n’ roll might have produced if given more chances to record during this period. — SCOTT SCHINDER